A campaign to help drive-in theaters convert to digital 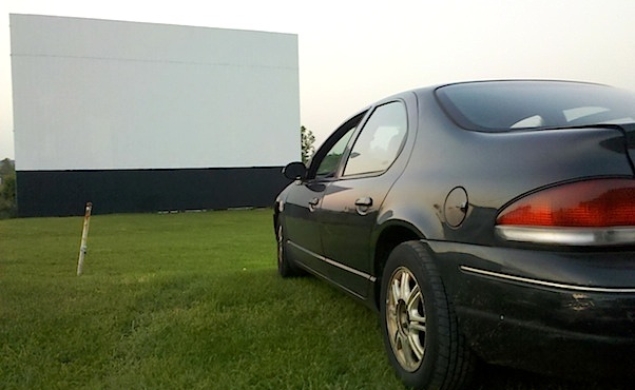 In the 80th year of the drive-in theater’s existence (the first one opened in June 1933 in Pennsauken, New Jersey), it’s a bad time to operate one. Drive-ins peaked in 1958 at 4,063 nationwide, compared to this year’s 357 theaters in the United States. As studios prepare to phase out 35mm prints entirely, many of the remaining drive-ins won’t be able to afford to purchase new digital projectors and will have to cease operations. In an interview with The Washington Post last month, drive-in industry expert Kipp Sherer estimated that as many as 20 percent of remaining drive-in screens could close.

Expressing concern about the situation, Honda has launched “Project Drive-in,” a website where people can vote on which five theaters should be saved, as well as donating to an Indiegogo campaign to buy more projectors. Drive-in operators are doing what they can to hype themselves in local media to gain more votes. “If we don’t win it, I hate to say it, but we’re probably going to close,” Charlie Perkins of Brownsville, Pennsylvania told his local paper. “If we do win, we’ll still need to come up with the money for a projector for a second screen,” he continued, pointing out that the cost of a new projector (in the $80,000 range) wasn’t the sole expense to contend with. The booth containing the projector must be nearly dust-proof and air conditioned, with Perkins estimating the total cost of each booth conversion at around $110,000.

This isn’t a problem that no one saw coming. Last December, Bloomberg writer Michael White reported that about 10 percent of remaining drive-ins had already converted. Earlier this year, digital projector manufacturer Cinedigm announced it had signed agreements with over 100 drive-ins to subsidize the installation of new projectors and screens and arrange for necessary loans. The idea was to help the remaining drive-ins convert the same way multiplexes were financially aided, though on a vastly accelerated timeline. “They gave us a short time frame to do it in,” Stephens City, Virginia drive-in operator James Kopp complained to the Post earlier this year. “It was like, ‘Hey, you gave the multiplexes five years to do this, and you are only giving us three or four months. That’s not fair.’” Drive-in theaters also couldn’t get the same help as multiplexes because (as Williams explained) they’re “warm-weather operations that don’t screen the required number of new releases to qualify” for subsidization by the studios (in the form of a virtual print fee, in which studios pay theaters a fee based on the number of digital screenings from the money they’ve saved by not making or mailing prints).

There were multiple technical problems to consider, as Belleville, Illinois operator told Joe Williams of the St. Louis Post-Dispatch “I knew this day was coming a couple years ago,” he says, “but the digital technology couldn’t accommodate a 100-foot screen. Then it became harder to find film prints and we didn’t have much choice. Last year we wanted to show Hotel Transylvania, but we discovered that there were only about 10 prints for the entire country.” Still, there’s no firm timetable for the end of celluloid. “Hollywood has not been very helpful in providing a hard-core date,” Cape Cod, Massachusetts, drive-in operator John Vincent Jr. told Illinois’ Daily Herald. “We’ve all assumed this will be the last summer for film, but nobody has come out and said, ‘This will be the drop dead date for film.’”