Our next Movie Of The Week: Robert Zemeckis’ Who Framed Roger Rabbit 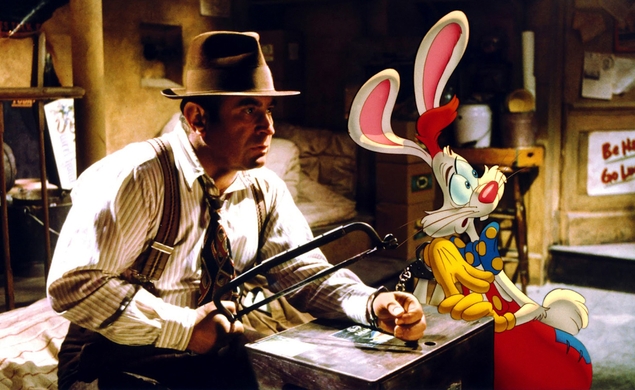 Usually, films built around groundbreaking special effects start to look dated within a couple of years, as profit-hungry studios and novelty-hungry audiences jump on the new thing and the technology either leaps forward, or gets overused and falls out of favor. So what to make of Who Framed Roger Rabbit, a major technological innovator that still looks convincing today? Made in the pre-computer-animation era, animated entirely by hand, without digital assistance, Roger Rabbit puts cartoon characters on the screen with human characters, and makes both of them seem equally cartoony, and equally real. It’s a knockout on more than a technical level, too: a noir-mystery-action-comedy with a decent mystery, a strong sense of time and place, and gags that still land solidly, even on the film’s 25th anniversary. And it stars the late Bob Hoskins, doing his best gruff-American-PI impression and pratfalling like a madman.

We’ve got plenty to say about Who Framed Roger Rabbit: I’ll kick us off on Tuesday by talking about the film’s technical side and the oddity of such a phenomenally popular movie essentially being a one-off rather than a franchise launch or a trend-starter. On Wednesday, our staff forum will get into the film’s violent comedy and comic violence, its use of pre-existing characters, the strange novel it adapts, and much more. And on Thursday, Matthew Dessem will take the conversation in a different direction with a look at The Thief And The Cobbler, the little-seen 1993 British animated film from Roger Rabbit animation director Richard Williams. P-p-p-p-please join us for the fun.

Upcoming Movies Of The Week
June 9: All That Heaven Allows
June 16: Plan 9 From Outer Space
June 23: Ace In The Hole
June 30: Airplane!