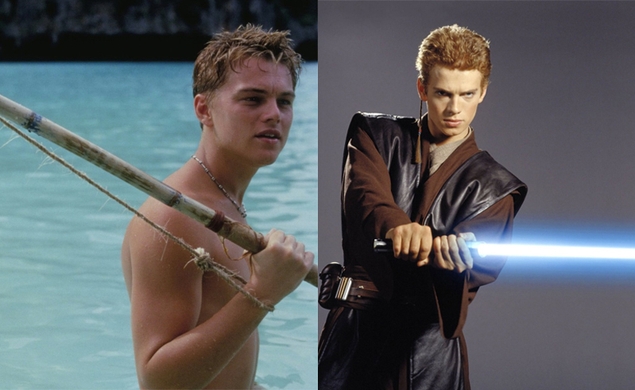 What were movie nerds talking about on this day five, or 10, or 25 years ago? In Old News, we reexamine a news story from this date in film history and see how it ultimately turned out.

Article: “More on Leo in Episode 2”

Abstract: Leonardo DiCaprio is up for the role of Anakin Skywalker in Star Wars: Episode II—Attack Of The Clones.

Excerpt: “I came across a bit of Star Wars: Episode II gossip via a friend of mine. She was in a bar in Chicago last night and in walked Ewan McGregor! Anyway she worked up enough nerve to talk to him and after a few drinks he started chatting about Star Wars. Apparently he (unfortunately) has a meeting with Leonardo DiCaprio this week and one with Leo and Natile Portman next week. He said he wasn’t sure if Leo was a lock but it looks that way. I don’t expect you to print this, but I thought it might be a nice lead.”

Aftermath: Somewhat surprisingly, this anonymous, second-hand report wasn’t off-base. DiCaprio did meet with George Lucas about the role of Anakin Skywalker. After this rumor started picking up steam, DiCaprio’s publicist confirmed to USA Today that the meeting had taken place, but insisted that DiCaprio was “definitely unavailable.” Evidently, Ewan McGregor really does like to tell random strangers he meets in bars all about his most secretive meetings!

Other actors auditioned for the part of Anakin, including Colin Hanks, Paul Walker, and Ryan Phillippe, but the part ultimately went to a relatively unknown Canadian actor named Hayden Christensen. The thing that blew my mind about this item wasn’t its flimsy source (Harry Knowles claims in the piece that he has “20 separate confirmations” about the DiCaprio/Lucas meeting), but the fact that the tipster was dreading the thought of Leonardo DiCaprio as the future Darth Vader. Granted, this was only about a year after Titanic-mania, when pop culture was a wee bit DiCaprioverloaded. And with the benefit of hindsight we know what kind of long, solid career DiCaprio had and what kind of performance Christensen gave.

But still: Is there anyone today who wouldn’t swap Christensen for DiCaprio if they could (except for maybe Christensen and DiCaprio)? Even with the exact same script, how much better does Attack Of The Clones get the second you put DiCaprio in the Anakin role? 20 percent? 30 percent? That’s got to be one of the most depressing what-ifs in recent casting history. And yet, at the time, the fact that it didn’t happen was greeted in some circles as good news. A lot can change in 15 years.

Also this week in movie history: The first concrete news about the project that ultimately became Prometheus began to leak out. Early reports pegged the film as a remake of Ridley Scott’s Alien, but this week in 2009, Collider spoke with Tony Scott, who explained that it was actually a “prequel.” At that time, the film was going to be directed by one of the Scotts’ protégés, Carl Rinsch. Ridley Scott himself ultimately directed Prometheus; Rinsch went on to make his feature directorial debut with last year’s 47 Ronin, which became one of the biggest flops in recent movie history.