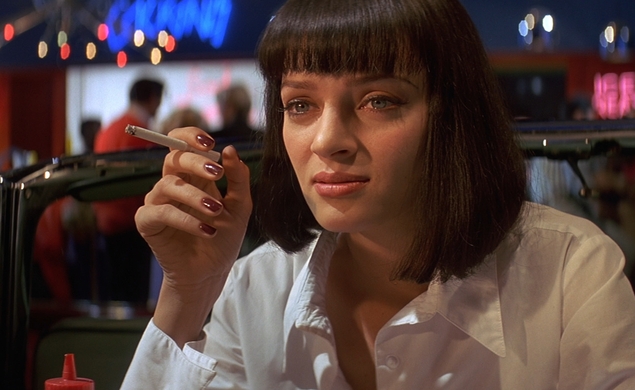 On Friday, May 23, Quentin Tarantino and Uma Thurman—and possibly John Travolta as well—will host a special screening of Pulp Fiction in Cannes, where the movie debuted 20 years ago. Pulp Fiction won the Palme d’Or that year, then became a major hit in the U.S., where the film’s dialogue, narrative structure, and attitude toward violence had an immediate, lasting influence on American movies and television. But we’ve always thought Pulp Fiction deserved more credit for its images, and for the way Tarantino framed and blocked the action in ways that shored up the movie’s humor and underlined its worldview. For proof, check out this list of five brilliant shots from the film. There are plenty more to choose from; you’re invited to share your favorites in the comments section below.

1. A conversation about foot massages before dying

Pulp Fiction opens with two prologues, both of which set up the third part of the movie’s triptych—although first-time viewers may not realize that for two hours. In the second prologue, Vincent Vega (John Travolta) and Jules Winnfield (Samuel L. Jackson) drive to a morning appointment with a group of middle-class college kids who have no business being involved in crime, and while they’re on their way to what turns out to be a hit, Vincent and Jules talk about world travel, the TV business, and the ethics of foot massages. Right before they’re about to enter the apartment and “get into character,” Vincent and Jules realize they’re a few minutes early, and step away from the door and down the hallway to finish their conversation. Tarantino doesn’t move the camera, though. The real action is still right there at the door, where the camera remains, while Vincent and Jules wander to the back of the shot, as though taking a break from their own movie. This is an early indication of what Pulp Fiction is going to do over and over—take its time to get to the plot, because the plot isn’t going anywhere.

Before Vincent picks up his boss’ wife Mia (Uma Thurman) for their big date, he stops by his drug dealer for some heroin. Vincent shoots up, and Tarantino begins intermingling past and present; as surf rock strums on the soundtrack, the film cuts back and forth between loving close-ups of drug paraphanalia and Vincent on his drive to Mia’s, where the backgrounds are represented by obviously fake rear-projection effects. The grainy images of desolate Los Angeles freeways are a clever way of visualizing Vincent’s high, and they lend a dreamlike, surreal atmosphere to the sequence. But in linking this outdated filmmaking technology to the supreme ecstasy of heroin, Tarantino is also drawing a comparison between the transportive effects of drugs and old movies. For him, a trip through a great old film is the ultimate high.

Pulp Fiction certainly has its share of showy shots, from Mia drawing a rectangle in the air as she tells Vincent not to be a square to the gold flashes that fill the screen when Jules and Vincent kill Brett. But Tarantino also knew when to stand back and let his actors take center stage. There’s no better example of that in Pulp Fiction than the lengthy sequence where returning Vietnam War veteran Captain Koons (Christopher Walken) presents a young Butch (Chandler Lindauer, who grows up to become Bruce Willis) with the antique watch which is his birthright. Koons’ monologue is shown in just a handful of shots, and the close-ups on Walken are absolutely mesmerizing, as he stares deeply at the offscreen Lindauer while explaining the lengthy history of this all-important object. In the key close-up, Walken holds up the watch for the audience and pauses for at least five seconds; it’s long and strange even by Christopher Walken oddball standards. His silence focuses attention on the watch, and reinforces one of the film’s core themes: the fleeting, slippery nature of time.

The term “pulp fiction” doesn’t just refer to crime novels; it also encompasses horror, fantasy, science fiction, romance, and smut. One of most exciting aspects of Pulp Fiction is the idea that these characters can stumble into somebody else’s pulp story at any time, while walking down an ordinary Los Angeles street. When Willis’ Butch and Ving Rhames’ Marcellus Wallace let their blood-feud spill into a pawn shop, for example, they end up bound and gagged in a torture-basement, imprisoned by a couple of racist perverts. Butch escapes, but can’t bring himself to let Marcellus suffer, so he heads back into the basement with a sword in his hand, and as Butch is approaching the door, Tarantino goes for a first-person perspective, with lighting that makes the whole scene look like some grim Euro-horror exercise or grubby American slasher. Butch’s bloody hand reaching slowly toward the entrance suggests the entirely different kind of genre that Tarantino could’ve chosen as the movie’s frame.

5. A great cup of coffee

What made Pulp Fiction feel so fresh back in 1994 was the way the movie’s characters seemed to exist in a real world, where people eat meals, go to the bathroom, sing along with the radio, and talk about other movies. When Vincent and Jules seek refuge at Jules’ friend Jimmy’s sunny suburban house in Toluca Lake, Jimmy begrudgingly serves them gourmet coffee while they wait for a problem-solving associate, “The Wolf” (Harvey Keitel). When the Wolf arrives, he asks for some of the coffee, and Tarantino holds on him for an extra beat while he takes a sip, is surprised by how delicious the coffee is, then looks back at Jimmy with a grateful smile. It’s a funny little gag that Tarantino set up earlier, but it also extends the movie’s general philosophy: Even when dealing with inconvenient corpses, there’s time to appreciate a good cup of joe.