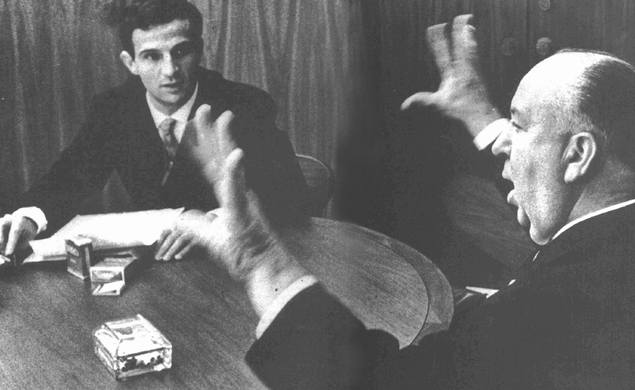 It was a busy weekend at Cannes for distribution announcements and deals for movies still in development. Here are a handful of news items Dissolve readers might find intriguing:

Hitchcock/Truffaut: One of the most beloved books in film criticism is about to become a Kent Jones documentary, featuring interviews with Martin Scorsese, Steven Spielberg, Brian De Palma, Wes Anderson, David Fincher, Richard Linklater, James Gray, Olivier Assayas, the Dardennes brothers, and more. Cohen Media Group, Artline Films, and Arte are co-producing Hitchcock/Truffaut, which will examine the content and enduring influence of François Truffaut’s 1966 book, derived from a series of 1962 conversations between the two directors (the recordings from which will be heard in part in Jones’ film). The normally glib, elusive Alfred Hitchcock opened up to Truffaut, getting into anecdotes about his personal life and observations about cinema that filmmakers and critics still cite. When completed, this documentary could be every bit as essential as the book.

Jarmusch/Pop: Jim Jarmusch has been working on a documentary about proto-punk artist Iggy Pop, reportedly combining interviews with The Stooges’ wiry frontman with additional material that’ll make this more of a Jarmusch film and not a conventional talking-head doc. The documentary was likely going to be completed no matter who stepped in to handle it, but this weekend, the film inched closer to the finish line with the announcement that New Element Global will be providing funding, while Independent and ICM Partners will be selling the doc overseas and in North America, respectively.

A Lars von Trier action movie? During an event in which producer Peter Aalbaek Jensen announced his plans to make a Viking epic in 2016 with star Stellan Skarsgård and screenwriter Tobias Lindholm, Jensen also confirmed the news that Lars von Trier is writing a horror movie for director Kristian Levring, and added that after that, “He is talking about making a Trier version of an action movie.” No further details were provided, but both of these tidbits from Jensen sound interesting, though too far in the future to seriously contemplate.

More from the director of The Silence: One of the better Scandinavian crime thrillers of recent years, 2011’s The Silence, was directed by Baran bo Odar, who has reportedly almost completed his next film. TrustNordisk will be showing clips from and taking international distribution offers for WHOAMI, described as another crime thriller, about the head of a mysterious, infamous group of hackers. If it’s as stylish and controlled as The Silence, WHOAMI will be one to watch for.

Helena Bonham Carter is her own grandma: Just announced today, the pre-World War I drama The Guns Of August will star Helena Bonham Carter as Margot Asquith, the second wife of British Prime Minister H.H. Asquith (played by Charles Dance), and will track the events of 1914 that led to the first World War. Downfall director Oliver Hirschbiegel is expected to direct Frank Doelger’s adaptation of Barbara W. Tuchman’s book, with production slated to begin next year. Game Of Thrones’ Emilia Clarke (mother of dragons, slayer of warlocks, breaker of chains) will play Violet Asquith, a daughter from H.H. Asquith’s first marriage and—here’s a fun fact—the grandmother of Helena Bonham Carter. This means Carter will be playing her own step-great-grandmother, if you can get your head around that.

Open Road wins Nightcrawler bidding war: All weekend long, the trades were buzzing that several companies were fighting over the domestic rights to Nightcrawler, a neo-noir about freelance crime reporters, starring Jake Gyllenhaal, and written and directed by Real Steel/The Bourne Legacy screenwriter Dan Gilroy. Eventually, Open Road locked it down for an undisclosed amount (reported by Deadline as just under $5 million), beating out A24, Focus Features, and the Weinstein Company. No word on when Open Road is planning to release the film, but Nightcrawler was reportedly shot in 2013, so it could be ready for release in 2014.

The Weinstein Company makes moves: Weep not for the Weinsteins missing out on Nightcrawler, because TWC was active over the weekend, making two big pick-ups. The company reportedly paid $12 million for the worldwide rights to Lion, a movie about an Indian boy who gets lost on a train. Shooting begins this summer, produced by the team that made The King’s Speech, a Weinstein Oscar-winner. TWC also extended its relationship with Once/Begin Again writer-director John Carney, paying $3 million to distribute Carney’s still-in-development Sing Street in America. The new film is another musical, set in the 1980s Dublin music scene, and will feature music by Bono and the Edge. Filming is set to begin later this year.