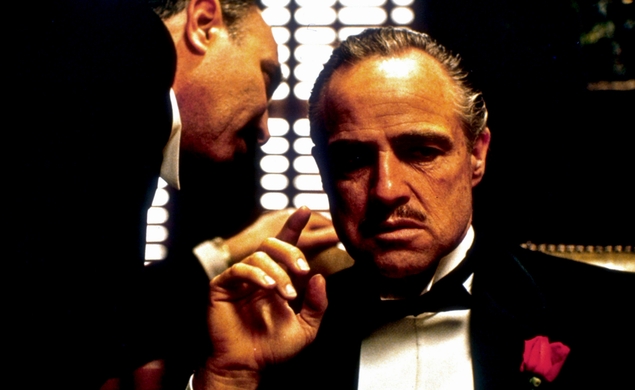 In Peter Biskind’s book Easy Riders, Raging Bulls, cinematographer Gordon Willis talks about the dark brown tones he achieved on The Godfather, and how they nearly got director Francis Ford Coppola fired:

“There weren’t a lot of contemporary mechanics introduced, like helicopters and zoom lenses. It was a tableau form of moviemaking, where the actors move in and out of frame, very straightforward. It was supposed to feel like a period piece… There was no discussion of lighting. I just did what I felt like doing. The design came out of the juxtaposition of the bright, cheerful garden party wedding that was going on outside, and the underbelly in this dark house. I used overhead lighting because the Don was the personification of evil, and I didn’t always want the audience to look into his eyes, see what he was thinking. I just wanted to keep him dark… (In those days) screens were so blitzed with light that you could see into every corner of every toilet and closet on the set. I’d always hear, ‘They have to be able to see it in the drive-ins….’ When the dark stuff started to appear on the screen, it seemed a little scary to people who were used to looking at Doris Day movies.”

Willis, who died yesterday at age 82, didn’t work on that many movies, relative to other cinematographers of his generation. He started in feature films late, lensing director Aram Avakian’s controversial 1970 establishment take-down End Of The Road at age 38, after spending years as a cameraman-for-hire in New York; and Willis worked on his last film, The Devil’s Own, in 1997, deciding that he had no patience for the direction that cinema was heading. But between 1970 and 1985 in particular, Willis joined the likes of Haskell Wexler, Néstor Almendros, Vilmos Zsigmond, Sven Nykvist, and Michael Ballhaus as part of a wave of cinematographers who were changing the way cinema looked, playing with lighting and film stock to give images a more tactile quality.

Willis had long associations with three directors in particular: Coppola, Woody Allen, and Alan J. Pakula. Willis’ collaboration with Allen began with Annie Hall, which brought a richness to New York City that the two men repeated in black-and-white on Manhattan, and later in period dress on Zelig, Broadway Danny Rose, and The Purple Rose Of Cairo. For Pakula, Willis worked on the sophisticated 1970s thrillers Klute, The Parallax View, and All The President’s Men, bringing visual depth and a documentary feel to offbeat detective stories; and after entering semi-retirement, Willis re-teamed with Pakula for the superb 1990 legal drama Presumed Innocent, and then again for The Devil’s Own.

But it was Willis’ work with Coppola that was his most significant, because the success of The Godfather and its first sequel opened up a window—however briefly—for Hollywood to make movies that took unusual and artful approaches to material that a decade earlier would’ve been rendered as generically as possible. Willis only collaborated with Coppola on the three Godfather films, but much of the moviegoing public’s memory of those movies is as attributable to Willis’ lighting as it is to Coppola’s blocking or to the performances of Marlon Brando, Robert De Niro, and Al Pacino. The popular image of a sunken-eyed Don Corleone, wearily receiving supplicants—that comes from Brando and Coppola, but it’s also due to Willis. His legacy is tremendous.