Our next Movie Of The Week: Frank Capra’s Mr. Smith Goes To Washington 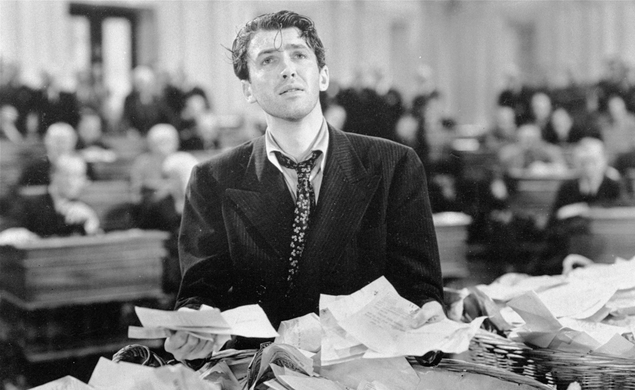 “Mr. Smith Goes To Washington is a significant picture. It is significant because it emphasizes democracy in action.”

Those are the words of radio commentator H.V. Kaltenborn, from the trailer for Frank Capra’s 1939 film Mr. Smith Goes To Washington. With no shortage of hyperbole, the trailer goes on to call Capra’s film “the greatest picture of filmdom’s top director” and “the most timely, the most vital, the most significant picture ever to come out of Hollywood.” That might be a slight overstatement, but there’s no question that Mr. Smith is one of the great American movies of the 1930s, and a stirring paean to American ideals. James Stewart stars as Jefferson Smith, an idealistic newspaper publisher tapped to replace a U.S. senator who passes away suddenly. Smith is chosen because his (unnamed) state’s media baron and his flunkies (including Claude Rains as Senator Joseph Paine) believe he’ll be easy to control, but when the junior Senator discovers a graft plot buried in an appropriations bill, it sets to stage for a classic movie climax, with Smith using a fillibuster to defend his good name and expose the corrupt special interests.

You’re under no obligation to stand through all three days of our Movie Of The Week coverage of Mr. Smith Goes To Washington, but extra style points to those who do. On Tuesday, my keynote will focus on Capra’s filmmaking and his use of camera placement and framing to enhance his underdog story. Wednesday’s forum will bat around the movie’s politics, its reception and legacy, Stewart’s performance, and more. And if you haven’t collapsed from exhaustion by that point, come back on Thursday for an essay by Nathan Rabin on the larger career of Frank Capra, and the disconnect between his reputation as a maker of sentimental “Capra-corn” and his often deeply cynical films. Plus, Mr. Smith was just added to Netflix Instant, which will make it very easy to catch up with it before next week’s conversation. We’ll see you then.

Upcoming Movies Of The Week
May 26: Menace II Society
June 2: Who Framed Roger Rabbit
June 9: All That Heaven Allows