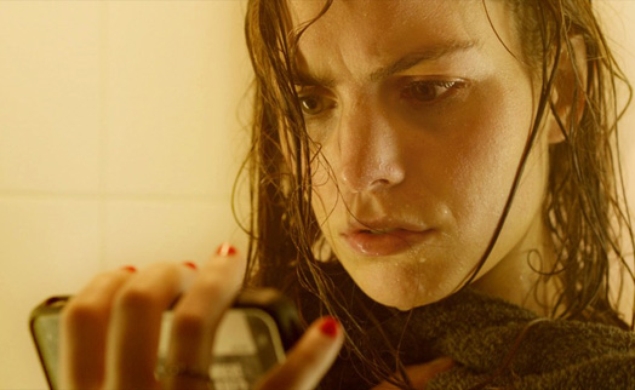 Before watching director Bobby Boermans’ Dutch thriller App, I dutifully downloaded and launched the free “second screen” app that accompanies the film, and then I waited… not really knowing what for. Then my phone buzzed for the first time, a few minutes into App, and I checked the little screen, which featured a fake news story about something I’d just watched on the bigger screen (a woman getting struck and killed by a train). From then on, every few minutes during App’s 75-minute runtime my phone would buzz and light up with a little something extra. Sometimes it’d be a text message exchange between the characters. Sometimes it was a different angle on the current scene. Never—I repeat, never—was it essential.

The advantage of technological innovation in art is that the first adopters get to establish for audiences what it means when, say, a movie is in 3-D or a piece of music is in stereo. For the past several years, TV networks have been pushing the idea of the second screen on their audiences, asking fans of certain shows to keep their phones or tablets on while watching, to get little bits of trivia or comments from other viewers. A lot of TV viewers do this anyway, scrolling through Twitter or Wikipedia during an episode; but the big media companies want to funnel those surfers into their own branded apps. So far, TV fans haven’t really been buying into that whole idea.

App is billed as “the first second-screen film,” in which viewers are encouraged to sit in a theater—or at home—with their phones fully engaged. (I watched the movie via a DVD screener; it’s currently widely available on VOD, and via digital rental.) And I’ll say this for App: Boermans and screenwriter Robert Arthur Jansen try to do more with the second-screen concept than just throwing pop-up trivia at the audience. Hannah Hoekstra stars as Anna, a college student who one day discovers a strange app on her phone, a Siri-like personal assistant called “Iris.” Soon Iris is messing up Anna’s life by making noise during class, taking embarrassing videos of her friends and faculty, and sending messages on her behalf. In the second half of App, the movie’s second-screen app starts showing more and more of what Iris is capturing and disseminating.

Without the second-screen gimmick, App would be a fairly routine semi-horror movie: competently shot, well-acted (especially by Hoekstra, who’s a star in the making), and plotted in such a way that all the unsettling mysteries in its first half get alternately mundane and silly explanations in its second half. With the gimmick, the film’s a little more fun. Every now and then, the second screen is used in a genuinely clever way. At one point, Anna picks up her phone, and the second screen shows an angle on Anna, holding the phone. At another point, the second screen buzzes with new information right when Anna steps into the shower on the main screen, leading the audience’s eyes away from one of the movie’s only titillating moments. And during the last act, one of the secret villains of the story is revealed via a text message on the second screen before he’s revealed in the film.

But as I said up top: None of this is necessary. Or I should say: None of it’s necessary on the second screen. In terms of conveying additional information, all of these extras—the messages, the bonus footage, the little countdown-to-destruction clock during the final stand-off—could be handled via split-screens and  onscreen text. (The naked-in-the-shower gag only works with the second screen, but then I’m not entirely convinced that’s an intentional bit of misdirection, given that none of the rest of the movie displays that much sense of humor.) There’s no true interactive element to what comes up on the second screen. Users can’t push any buttons, swipe any screens, or click any links. And while in theory that keeps the second screen from diverting too much attention from what’s on the main screen, I still found myself looking over at my phone constantly; waiting for it to buzz and wondering if the App app was broken if it didn’t show anything for a couple of minutes.

Is App’s use of second-screen technology going to be what all future second-screen movies will be like? Honestly, I can’t imagine that there will be many “future second-screen movies.” I know that theater owners and Hollywood studios have been brainstorming ways to make the theatrical experience more unique and immersive, and I know that second-screen movies seem like a cheap, harmless way to do just that. (“Since our patrons are checking their phones during the show anyway…”) Except that as deployed in App—as well in conjunction with all of those second-screen-enhanced TV shows—the technology doesn’t make the experience more immersive. I’m not the biggest advocate of 3-D, but I do understand that 3-D means to pull viewers into another world. Second screens do the opposite.