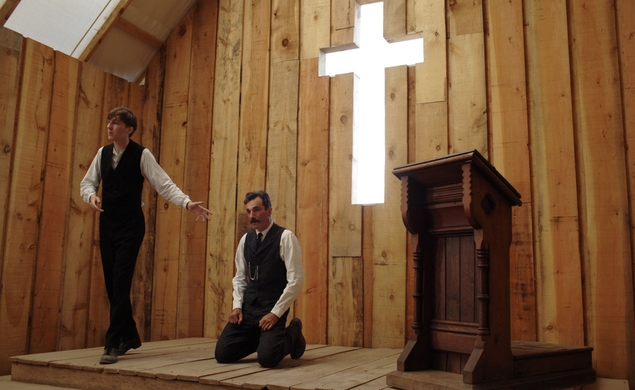 Londoners and Manhattanites: prepare to have your milkshakes drunk. Composer and Radiohead guitarist Jonny Greenwood will perform his score for Paul Thomas Anderson’s There Will Be Blood live at film screenings in your cities this summer and fall.

The London event takes place on August 6 and 7 at the Roundhouse, where Greenwood will be joined by over 50 musicians from the London Contemporary Orchestra. Then on September 19 and 20, Greenwood and the Wordless Music Orchestra will accompany There Will Be Blood at New York’s United Palace Theater, an old movie palace that later became a church and part-time concert venue. Greenwood won’t be conducting; instead he’ll be playing an ondes Martenot, described by Rolling Stone as an “eerie-sounding, early 20th century amplified keyboard.”

There Will Be Blood was Greenwood’s first collaboration with Anderson; he later went on to score The Master and will also provide the music for the director’s upcoming film Inherent Vice. His music for There Will Be Blood garnered widespread acclaim but was deemed inelligible for an Academy Award nomination for Best Original Score because it contained recycled elements from previous Greenwood compositions (thus rendering it not “original” enough for the dopey Academy).  The opportunity to see this great movie on the big screen in a huge old theater would be exciting enough; the addition of Greenwood and dozens of musicians playing live makes this a must-see event. Tickets for the London dates are on sale now; tickets for the New York screenings go on sale on Wednesday.