Feedback: Why the newest format isn’t always the best one 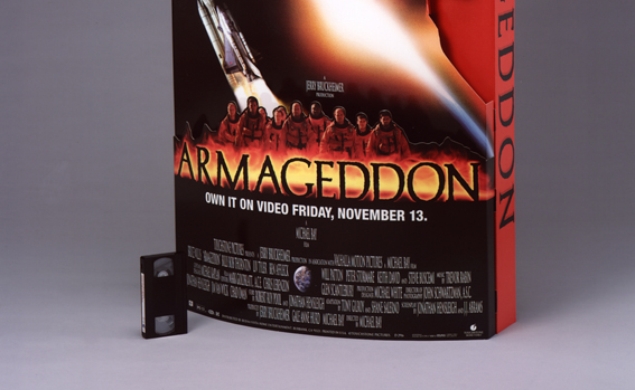 It’s been over a week since reader-generated “Lovefest” essays starting appearing in the comments sections of our daily “Read On” posts, and both the essays and the discussion they’ve generated have been thoughtful and insightful enough that I could probably do a daily Feedback in response. The list of essays so far can be found here (courtesy of Julius Kassendorf), and there should be a new one up later today. In the meantime, please read NerdInTheBasement’s essay from last Friday about Armageddon, which begins with this provocative statement:

“Is there any other medium better suited for watching film on than VHS? Oh sure, Blu-rays have got better picture quality, and Netflix sure is handy, but for me, those videocassette tapes just seem more… cinematic I suppose than anything else in the home video market. One of the first things I learned how to do as a toddler was operate a VHS player, with tapes of Disney movies being something I watched endlessly. The imperfections that came with VHS were part of the charm, and I wouldn’t change them for the world. As I entered my teens, I found VHS tapes were super-duper cheap at our local Half-Price Books, and so I picked up a bundle of 1990s disaster movies that I bought solely because the cover art on all of them was badass. (Is there really a more enticing cinematic visual than the White House underneath a giant alien ship?) Volcano, Jurassic Park, Independence Day… all were ingrained in my memory as truly unique experiences.”

Washington followed up on this idea:

“I just wanted to do a little expansion on your VHS idea which I think is simply marvelous. It reminds me of a lot of experimental filmmakers, most notably Michael Snow, who discuss their films entirely in terms of celluloid and won’t let them be seen any other way. There is a radically different effect of films depending on the medium shown. I know that Alexander Kluge calls this “cinema’s shadow,” half due to the fact that we actually see only 12 frames per second in theater projection, with the other 12 covered by the pull, meaning for 1/24 of a second we see nothing but absolute black. VHS does something similar since it is being projecting from a physical source rather than a digital source. In some ways this can be more true to the source film than even the best Blu-ray despite the decreased picture quality.”

There followed a lengthy exchange between Washington and The Manipulator about filmmakers who’ve used lo-fi video well (including David Lynch and Harmony Korine). I was drawn to this conversation for a couple of reasons—one of which comes at this question from the opposite point-of-view.

As someone who came of age as a cinephile during the heyday of the video store (and someone who spent a year working at a Blockbuster Video), I watched a lot of masterpieces that were ruined by terrible transfers, or made worse by cheap videotape. The difference between the public domain Charade VHS I used to own and the first Criterion DVD edition was revelatory, with the latter making a movie I’d known as muddy and fairly leaden into something colorful and sprightly. I still shudder thinking back on my first experience with Jean Renoir’s Grand Illusion, on a VHS tape with a washed-out image and distorted sound. And a couple of weeks ago, after watching a nice DVD edition of Gorgo for my article about the film, I took another look at the Mystery Science Theater 3000 version of Gorgo on YouTube, and found the image so murky that I could understand why any casual viewer would (wrongly) assume that Gorgo is terrible.

That said, I agree that older technology holds both a nostalgic appeal and unique qualities that can enhance the work. I sold off about 80% of my vinyl record collection after college, because I thought I had everything I needed on CDs (and later MP3s), and didn’t feel like hauling around heavy albums any more every time I moved. But a few years back, I moved my home office to the same room where my old turntable is, and after I got tired of listening to the same 100 or so LPs over and over, I started scouring the dollar bins for used vinyl at our local big box media store, sometimes buying records just because of one song I used to like, or because it was by an artist I’d always meant to explore more. And while I’m no vinyl snob, I’ve found that the tactile quality of some of these old records has helped me hear some music in an entirely new way. (Linda Ronstadt, for example, is an artist I’ve always found too dry on the radio, on CD, and via MP3; but listening to her on vinyl, there’s a warmth and oomph to her songs that I’ve found surprisingly affecting.)

Even beyond the value that a format itself brings to the work it contains, I think there are external factors to media consumption that influence us in ways we don’t always want to admit. Sometimes it’s just a matter of expectation. The not-bad movie that we find in a bargain bin or surf past on TV can feel like a real discovery. And then there’s the matter of familiarity. When we’re younger, and have limited resources and loads of time to fill, we can watch the same movie over and over until just a glimpse of it on TV decades later can bring back how nice it felt to slide a plastic tape out of cardboard sleeve on a lazy summer afternoon.