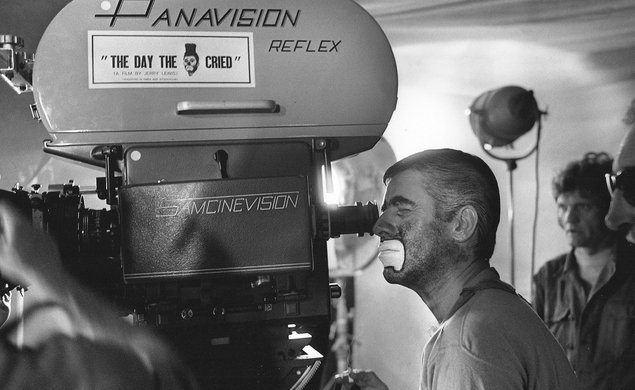 It is one of the holy grails of cinephilia: Jerry Lewis’ 1972 film The Day The Clown Cried, about a circus clown (Lewis) who leads Jewish children to the gas chambers in Nazi Germany. Lewis was so embarrassed by the results (rightfully, according to the handful of people on the planet who have actually seen it) that he ensured the film was never released. It sits in a vault somewhere, and according to Lewis, that’s where it will stay for eternity.

Still, the legend of The Day The Clown Cried continues to grow. It’ll only get bigger now that seven minutes of behind-the-scenes footage has randomly popped up on YouTube. First spotted by the Mondo Film + Podcast, the clip reveals Lewis on the set of The Day The Clown Cried, answering questions from a documentary film crew, and performing in full clown makeup as his character, Helmut Doork. (Again, this movie is set in Holocaust concentration camps.) It’s not a lot of footage, but what’s here is pretty remarkable. Take a look:

As recently as this year’s Cannes Film Festival, Lewis continued to insist that no one would ever see The Day The Clown Cried. Which means this could be all we get for a long time. Here’s The Simpsons’ Harry Shearer, one of the lucky few who’ve actually seen The Day The Clown Cried, talking to Howard Stern about the film and the various theories why it was never released.