Our next Movie Of The Week: David Cronenberg’s Videodrome 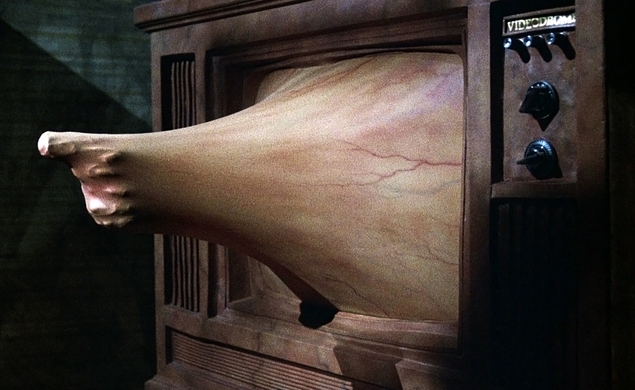 Back in 1983, David Cronenberg looked into his crystal ball and saw the future with his cult horror movie Videodrome, which saw in VCRs and naughty UHF outposts a time when people and technology would start to converge. In a role that seizes on his particular strain of high-strung wickedness, James Woods stars as Max Renn, the president and programming chief at CIVIC-TV, a Toronto station that specializes in bringing softcore to pervy, channel-flipping night-owls. (Slogan: “The one you take to bed with you.”) Always on the lookout for the edgiest possible product, Max discovers an encrypted feed that’s nothing but raw footage of naked women being tortured against a red clay backdrop. As he becomes obsessed with tracking down the source of the footage, Max gets involved with a sadomasochistic radio DJ (Deborah Harry) who’s similarly intrigued, leading both of them into a technological conspiracy of mind-and-body-bending proportions. What follows is both thoroughly disgusting and thought-provoking, as only David Cronenberg can be.

On Tuesday, we’ll kicked off the discussion with a Keynote from yours truly on how Cronenberg’s attraction to—and anxiety about—present technology resulted in a vision of future technology. We’ll continue with the forum on Wednesday, which talks about Videodrome’s place in Cronenberg’s career, the film’s approach to sex and violence, and how it looks 30 years later. Then Keith Phipps will wrap things up on Thursday with an essay on other films, from Terrorvision to Poltergeist, that expressed a fear of television.

Upcoming Movies Of The Week
May 19: Mr. Smith Goes To Washington
May 26: Menace II Society
June 2: Who Framed Roger Rabbit?