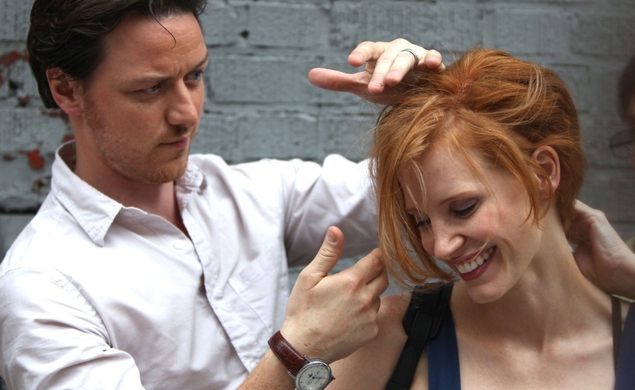 When the Cannes lineup was announced last month, I was immediately curious about the appearance in the Un Certain Regard section of a movie that the official Cannes site called Eleanor Rigby. It didn’t take much digging to realize that this was The Disappearance Of Eleanor Rigby, a movie I’d seen in Toronto last September, where it played as a work-in-progress.

In Toronto, The Disappearance Of Eleanor Rigby screened in two feature-length parts: one tagged “Him,” about a struggling New York restaurant owner (played by James McAvoy) trying to get over his wife leaving him; and one tagged “Her,” following the wife (played by Jessica Chastain) as she moves back in with her parents and tries to get her life back together. At the TIFF première, writer-director Ned Benson said that he hoped that the two films would be released independently of each other, and that they could be watched in any order, or could stand completely alone. And according to Deadline, the Weinstein Company (which reportedly paid a handsome $3,000,000 at TIFF for the rights to handle the film) is going to give Benson his wish, releasing “Him” and “Her” separately this fall.

But that Cannes screening isn’t of “Him” or “Her” (or both); it’s of a new two-hour cut, dubbed “Them.” According to Benson in the Deadline article, this new cut was never a condition of the sale to the Weinsteins, and wasn’t ordered from on high. Benson says that Harvey Weinstein—notorious for forcing edits on “difficult” films—merely “gave me the opportunity to see if an omnipotent version could function as its own film.” And after re-editing the material into one story (with the help of some outtakes that didn’t fit into either earlier version), Benson feels he has yet another film that can stand on its own. It’s this “Them” version that will be the first The Disappearance Of Eleanor Rigby that most movie audiences get to see, since it’ll be coming out on September 26th, before “Him” or “Her.”

As someone who liked The Disappearance Of Eleanor Rigby at TIFF, I have mixed feelings about this move. On the one hand, I never felt the bifurcation fully worked; in the versions I saw, Benson didn’t really take enough advantage of the idea of a couple seeing the same events from different perspectives. To me, “Her” is a pretty strong indie drama, and “Him” is fairly negligible, aside from the few scenes that Chastain is in. If “Them” gets more people to recognize Chastain’s excellent work, I’ll be glad of that. On the other hand, the whole point of “Him” and “Her” is the difference in tone and viewpoint, so I’m not entirely sure what the deeper purpose of “Them” will be. But as I said up top: I’m still curious.