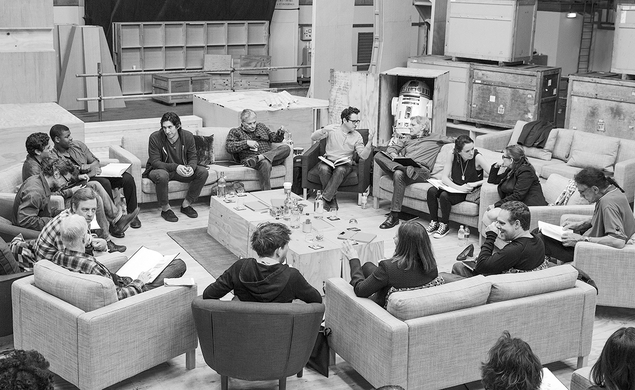 At long last, Lucasfilm and Disney have announced the cast of Star Wars: Episode VII—We Wanted To Wait To Announce This Until May 4 But Too Much Was Leaking Out. There are a few names we expected to see (Mark Hamill, Harrison Ford, and Carrie Fisher) a few names that were rumored for roles (Adam Driver, John Boyega), and a few names that are pleasant surprises. (Max von Sydow!) The full official lineup, along with comment from director J.J. Abrams, from StarWars.com:

Director J.J. Abrams says, ‘We are so excited to finally share the cast of Star Wars: Episode VII. It is both thrilling and surreal to watch the beloved original cast and these brilliant new performers come together to bring this world to life, once again. We start shooting in a couple of weeks, and everyone is doing their best to make the fans proud.’

Star Wars: Episode VII is being directed by J.J. Abrams from a screenplay by Lawrence Kasdan and Abrams. Kathleen Kennedy, J.J. Abrams, and Bryan Burk are producing, and John Williams returns as the composer. The movie opens worldwide on December 18, 2015.”

The picture above, also from StarWars.com, shows the cast gathered for a script reading. You can see Abrams in conversation with Harrison Ford, along with the rest of the just-announced actors. Also notice R2D2 sitting in a crate in the background; I just hope they didn’t make Kenny Baker sit in there while they read the entire script for the sake of authenticity.

UPDATE: Here’s the reel of actress Daisy Ridley, the relative unknown among the new cast, as spotted on YouTube by commenter Crazytown Bananapants. She looks like a major discovery. And one of the clips even references John Williams!

RE-UPDATE: The reel was made private. If it pops up online elsewhere, we’ll post it again.