Op-ed: The cure for the common spectacle 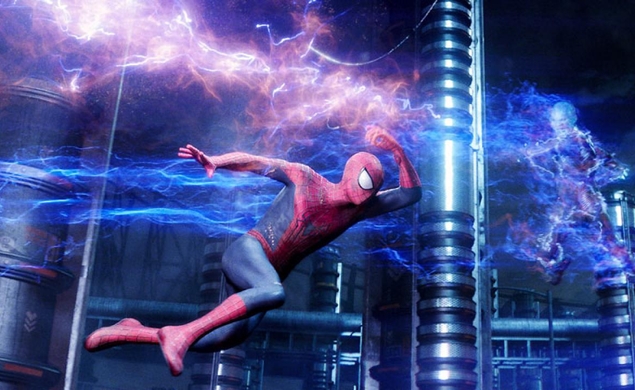 The Spider-Man of The Amazing Spider-Man 2 is the Spider-Man of Stan Lee, Steve Ditko, and John Romita’s wildest fantasies (and, frankly, mine). He’s as nimble as an acrobat and as strong as a powerlifter, and frequently both simultaneously; he’ll swoop through Times Square, flip himself onto the roof of a police car in mid-air, and then land gracefully on the ground, balancing the sedan over his head like he’s palming a basketball. Director Marc Webb’s imagery is kinetic, fluid, and gorgeous. He’s made the best-looking Spider-Man movie ever, full-stop. But it’s very likely no one will notice.

These were the thoughts I had as I left a press screening of Amazing Spider-Man 2 a few weeks ago. As a devout Spider-Man obsessive who spent decades reading and dreaming about the character, I’m sort of an easy lay for displays of his powers and abilities. And the ones in Amazing Spider-Man 2 are fantastic. Other critics I’ve spoken with, however, are far less impressed. “Sure, the movie looks good,’ one said to me. “So what? There have been four good-looking Spider-Mans before this one. It needs to do more than just look good.”

Even as a Spidey apologist, it was hard to argue. Amazing Spider-Man 2 might be the most beautiful Spider-Man, but it also stands a good chance of being completely forgotten, because it looks incredible, but not special. Even if it wasn’t the fifth major Spider-Man film in less than 15 years, it would still be the second massive superhero extravaganza in a month (after Captain America: The Winter Soldier, which crashed a flying aircraft carrier into Washington D.C. ) and one of four coming this summer, including X-Men Days Of Future Past (starring mutant-hunting future robots) and Guardians Of The Galaxy (featuring talking raccoons and sentient trees). There are also blockbusters about giant fighting dinosaurs, a Greek demigod, mutant ninja turtles, and armies of apes. These days, once-in-a-lifetime visuals are more like once-a-week occurrences, and it seems like Hollywood produces more “extraordinary” movies than ordinary ones.

In a column at HitFix earlier this week, Drew McWeeny echoed a lot of my feelings about The Amazing Spider-Man 2 and the summer movie season in general in a piece about what he dubs “the age of casual magic.” Hollywood has gotten so good at bringing the impossible to life onscreen, he says, that they’ve devalued their most important (and often only) selling point: spectacle.

“There is nothing more dangerous to storytellers than the idea of an audience that is incapable of awe anymore, and yet that's what our studio system seems determined to create. It's like putting someone on an all ice cream diet. If you forced someone to eat ice cream breakfast, lunch, and dinner without any interruption, that person would eventually learn to detest ice cream. The thought of it would make them physically ill. You would destroy it for them.”

“The age of casual magic” might also be described as “the age of not-so-magical sameness.” More and more films, even the most expensive ones, look almost identical to one another. In the case of Marvel Studios’ Cinematic Universe, that’s actually by design; though different directors are brought in to handle the day-to-day duties on set, a team of producers and writers, led by Marvel President Kevin Feige, oversee their work, and ensure that each disparate Marvel movie fits with the others. Like so much else from Marvel’s movie playbook, this is something that comes from the way it makes comics. In the heyday of Stan Lee and Jack Kirby, Marvel had a “house style”—if Kirby himself couldn’t draw something, odds were someone was being paid to draw it like him. But Kirby’s artwork was dynamic, a word that rarely applies to the visuals of Marvel movies.

The companies that don’t make movies the Marvel way are now trying to; Fox, Sony, and Warner Bros. all have plans to start their own universes. Each one of those mega-franchises will have its own homogeneous house style and plenty of high-end visual effects. It’s as if Hollywood is now run by Syndrome, the villain from Pixar’s The Incredibles, who threatens to sell his inventions to the world so that everyone can become a superhero. When everyone’s super, he declares, no one is.

What Hollywood really needs to do is to step back from special effects as a selling point and start using it as a storytelling tool. A few days after I saw Amazing Spider-Man 2 I rewatched Under The Skin. Though it was made for a fraction of the cost, Jonathan Glazer’s movie about an alien hunting hitchhikers across Scotland has its own share of powerful visuals: Ambiguous voids of white and black, humans slowly disintegrating in pools of inky liquid, aliens hidden beneath human flesh.

Early sequences follow Scarlett Johansson’s character as she searches for victims in a white van. To enhance the authenticity of these scenes, Glazer hid cameras in the van’s dashboard, and had Johansson interact with real men she found on the street; she would size up a target, pull over, and try to sweet-talk them into her car while Glazer secretly recorded the results. The technology to achieve such a feat—and to make it look relatively seamless with the rest of a conventionally-shot movie—didn’t exist before Under The Skin. Glazer and a team of experts actually developed new kinds of hidden cameras in order to make the scenes work.

But these sequences are so subtle that some audiences barely notice them (about half the people I’ve spoken with say they had no idea the early scenes were shot with hidden cameras). Glazer didn’t help invent an entire camera system just for a couple of “cool” visuals; he did it because he wanted to show how this alien’s method of capturing men would work in practice, to see actual guys react to the physical presence of Scarlet Johansson, and to achieve the most naturalistic performances possible. The cameras and the special effects were a means to an end, not the ends in and of themselves. The modern blockbuster, on the other hand, has nothing under the skin.

McWeeny concludes his essay by imploring Hollywood to “make the stakes more personal” while “telling good stories that also happen to be amazing to look at.” That would certainly be a good step in the right direction, and there are are a few other directors who have already taken this message to heart (David Fincher springs to mind). Naturally, it looks like Hollywood is instead going to double-down on spectacle and invest even less in storytelling. The next frontier in the race to be cinematically bigger, faster, and stronger than the competition is something called 4-D movie theaters, where the action onscreen is “enhanced” by physical effects like water, wind, motion, mist, and scents. The first one opens in Los Angeles in late June or early July. In the future, when an enormous blockbuster stinks, it will literally stink.