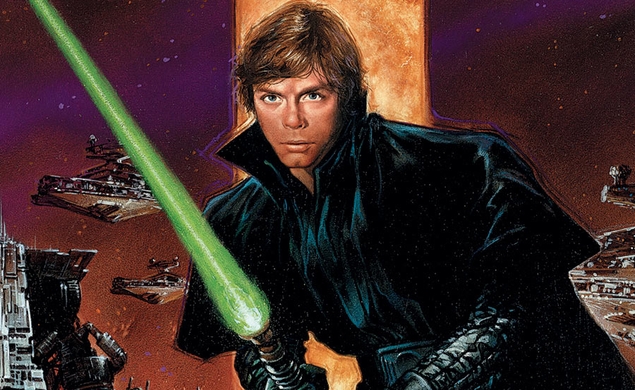 Even if you’ve seen all six Star Wars movies, you are but a padawan learner when it comes to the full breadth of the Star Wars universe. Although George Lucas stopped his film series at half a dozen entries, his company has produced dozens of books and comics and videogames and cartoons set in what’s known as the “Expanded Universe.” This is where you got to follow the continuing stories of characters like Luke Skywalker and Han Solo, and also meet entirely original creations like Jacen Solo, Mara Jade Skywalker, Darth Bane, and other fun names I just found on Google.

One major question about the upcoming Star Wars: Episode VII—Why Aren’t You Camping Out At The Theater For Tickets Yet? is exactly what, if anything, it will borrow from this Expanded Universe content. When at one point it looked like Lucas would never make any more Star Wars movies, he satisfied the demand for new material by releasing books and comics that chronicled the events after Return Of The Jedi—the same time period when Episode VII is supposed to be set. Theoretically, then, J.J. Abrams’ film could just take the existing characters and situations and rehash them on the big-screen. But in a statement on StarWars.com, Lucasfilm has announced that the new movies will not be held to the continuity of old stories:

“In order to give maximum creative freedom to the filmmakers and also preserve an element of surprise and discovery for the audience, Star Wars: Episodes VII-IX will not tell the same story told in the post-Return Of The Jedi Expanded Universe. While the universe that readers knew is changing, it is not being discarded. Creators of new Star Wars entertainment have full access to the rich content of the Expanded Universe. For example, elements of the EU are included in Star Wars Rebels. The Inquisitor, the Imperial Security Bureau, and Sienar Fleet Systems are story elements in the new animated series, and all these ideas find their origins in roleplaying game material published in the 1980s.”

That is good. I am a huge fan of the Sienar Fleet Systems, especially their early stuff before they went electric.

I would imagine some diehard Star Wars fans are going to be upset about this, mostly because diehard Star Wars fans are always upset about something, and now their favorite stories are about to be erased from continuity. I’m sure that pain will be eventually be tempered by the knowledge that they’re also getting brand-new movies and, conceivably, a whole new Expanded Universe that can fill in all the story gaps J.J. Abrams leaves dangling around. Just think of all the new Sienar Fleet Systems books we’re going to get! I’m so excited I’m having trouble breathing. I should probably go lie down.