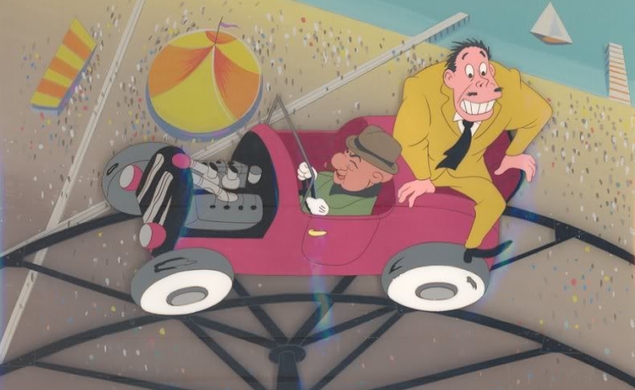 The residue of revolutions sometimes clings to culture like a stubborn stain, lingering so long that it’s hard to remember who made the mess in the first place—or why. When I was a kid in the 1970s and 1980s, any cartoon featuring the character Mr. Magoo was something to suffer through while waiting for something better to come on TV. But that was because the Magoo cartoons on television back then were usually the ones that were made for TV, with cruder animation, washed-out colors, gratingly tinny soundtracks, and worn-out gags.

Only later, when I became more interested in the history of animation, did I learn the story of United Productions Of America, the rogue studio formed in the 1940s by ex-Disney and Warner Bros. artists, who made a virtue of necessity and used their dinky budgets on shorts that had more style and imagination than what their better-heeled colleagues were producing. A big reason why UPA was able to make so many innovative cartoons was because of Mr. Magoo, a character co-created by Millard Kaufman and John Hubley in 1949, and made famous in a series of wildly popular theatrical shorts released by Columbia Pictures throughout the 1950s.

Shout! Factory has previously released a DVD box set of the various Mr. Magoo television series—the source of all those tedious cartoons I watched as a boy—and now they’ve gone back even further for the four-disc Mr. Magoo: The Theatrical Collection 1949-1959, which contains 58 shorts plus the feature film 1001 Arabian Nights. These early shorts are the real Magoo: fast-paced, colorful, wonderfully off-kilter cartoons about a near-sighted crank (voiced by Jim Backus) who stumbles into dangerous situations that he barely survives, all while blissfully unaware that he’s in trouble.

The excerpt from the Oscar-nominated 1950 short “Trouble Indemnity” above is a fine example of what set these films apart at the time. The basic gag of Magoo wandering through a construction site and repeatedly almost dying is one that future iterations of the character would rely on again and again; but there’s more of a split-second quality to the narrow escapes here, and a look to the backgrounds and characters that’s more abstract and jazzy than other American cartoons of the era—and Disney’s in particular.

Disney’s rounded, storybook quality quickly evolved into something more adventurous in the UPA era, and the UPA style became more common in the industry in general, such that people who see these cartoons out of context may not immediately grasp what a radical shift they were at the time. They’re entertaining regardless, though—especially for people who’ve seen a lot of the TV Magoo, or had to watch that terrible 1997 Leslie Nielsen live-action movie. Those represent the tired thing that Mr. Magoo became. The cartoons in this set are from when Magoo was new.