With Hollywood officially out of other ideas, Fox prepares Mrs. Doubtfire 2 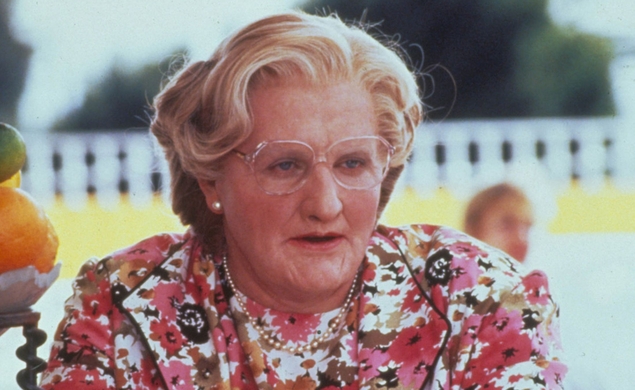 HellOOOOOOoo! With the lineup of the 2014 Cannes Film Festival freshly announced, Fox made a bold move toward getting a film into the 2015 competition, with the news from The Hollywood Reporter that the studio is working on a sequel to its 1993 comedy hit Mrs. Doubtfire. It’s an event 20 years in the making!

The original film starred Robin Williams as a man embroiled in a bitter divorce with this wife (Sally Field). Desperate to see his kids, he employs his makeup-artist brother to concoct a disguise he can use to become his children’s new nanny. Thus was born Mrs. Doubtfire, a baudy, bodysuited old British lady who charms the family with her wit and humor. It sounds like an unlikely blockbuster, but Williams’ live-wire performance charmed audiences; the film went on to earn $441 million worldwide and became the second-highest-grossing movie of 1993 after Jurassic Park. It won the Golden Globe for Best Comedy/Musical of the year and is also, according to Box Office Mojo, the all time top-grossing movie in the lucrative “Comedy - Fat Suit” genre.

According to THR, Williams and original Doubtfire director Chris Columbus are both attached to this sequel. The project has been in development since at least 2001, when Bonnie Hunt was hired to write a script for a Doubtfire 2, but neither her version nor any of the drafts that followed met Fox’s high standards. The latest screenplay is being written by David Berenbaum, who previously penned Elf and The Haunted Mansion. THR says it’s “too soon to predict if all the elements will ultimately come together,” but with the American people desperately crying out for more fat-suit comedies, I’m sure Williams will soon dust off Mrs. Doubtfire’s housecoat and synthentic lady-parts once more.