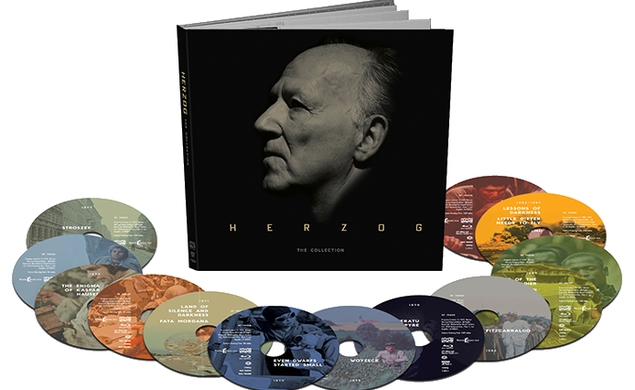 Werner Herzog fans will want to read through this item as quickly as possible and then click here while there’s still time. Shout! Factory just announced a limited edition Blu-ray set containing 16 of Herzog’s best films, packaged with an attractive booklet and a nice set of bonus features. Only 5,000 copies are planned, and the first 100 orders will be signed by Herzog. (Or I should say the first 99, because at least one of those signed copied has just been purchased by me.) List price is $159.99. The set will be out July 29, although people who order directly through the Shout! Factory site will get theirs shipped on July 15.

From his early days as part of the German New Wave, Herzog earned a reputation as a filmmaker interested in an unusual level of realism. He’s always been drawn to larger than life characters: explorers, industrialists, outsiders, and the like. And he’s tried to re-create the circumstances of their stories so faithfully that his feature films have the quality of documentaries, while his documentaries often feel staged and somewhat unreal. The films in this set are among the best and most significant of the 1970s and 1980s, which makes the set itself one that most cinephiles are probably going to want. If you count yourself among the covetous, I’d jump on this.

Here are the pertinent details about the set itself, from Shout! Factory’s press release: