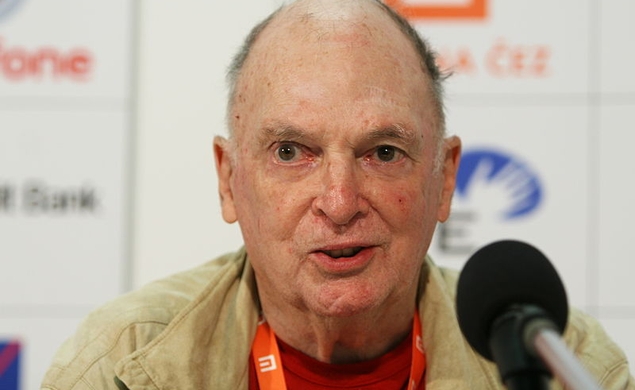 Article after article about next week’s Captain America: The Winter Soldier have hailed it as a throwback to the great conspiracy thrillers of the 1970s, which makes today’s news particularly sad: The man who wrote two of the best of those thrillers, Lorenzo Semple Jr., died today, one day after his 91st birthday.

Semple was born in New Rochelle, New York, in 1923. After serving in World War II, he took writing classes at Columbia University, and then made his way out to Los Angeles. Though he started off writing scripts for the movie studios, he gained more traction on television. Along with producer William Dozier, Semple developed the campy 1960s Batman TV series starring Adam West and Burt Ward. According to The Hollywood Reporter, while Semple only wrote the show’s first four episodes, he served as script or story consultant for its entire run:

“He also penned the show’s ‘bible’ for the other writers. (One rule: Batman should never break the law, not even to park in a no-parking zone during a crime-fighting emergency.)”

Semple, whom THR credits with the idea for the colorful “Pow! Zap!” intertitles that became the series’ signature, also wrote the Batman movie from 1966 that utilized the same cast and crew as the series, and then made further inroads into the film business, writing a string of book adaptations including Fathom, The Sporting Club, and Papillon with Steve McQueen and Dustin Hoffman. He really hit his stride in the early ’70s with his thrillers: The Parallax View (co-written by David Giler) in 1974 and Three Days Of The Condor (co-written by David Rayfiel) in 1975. Both films captured the country’s cynical, paranoid mood in the wake of the Watergate Scandal, and remain beloved classics in their genre. Later, Semple wrote the 1976 remake of King Kong and the 1980 version of Flash Gordon, two films that aren’t regarded as classics that I’m not ashamed to admit I kind of love.

For years, Semple was best known for the Batman TV show, which eventually accrued a bad reputation, partly because it had the temerity not to take Batman seriously and partly because it became a derisive shorthand for comic books for decades. (Semple’s ingenious visual sound effects unwittingly birthed a thousand “Pow! Biff! Comics Aren’t Just For Kids Anymore” headlines.) But I adored Semple’s Batman as a kid, and revisiting it as an adult I was happy to see it was often a very clever series. (Bat-Shark Repellent forever.)

It’s hard to believe the man who crafted that show’s cheerfully silly tone also helped define some of the bleakest thrillers of the 1970s. But that just speaks to Semple’s talents, and to his versatility, which he sadly never got enough credit for in his lifetime. His work still entertains audiences and, as evidenced by The Winter Soldier, continues to influence Hollywood.