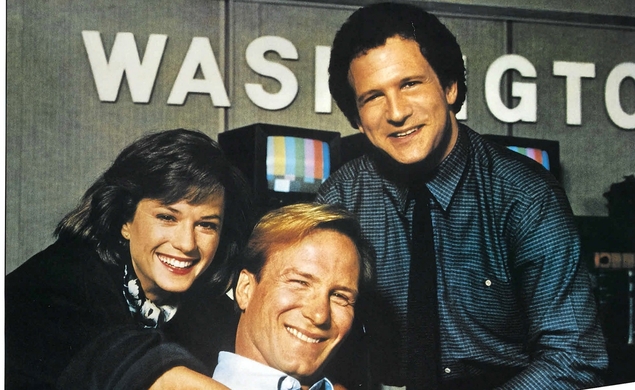 The kind of movie that gives “middlebrow” a good name, James L. Brooks’ 1987 comedy Broadcast News is about something important, as Brooks tackles the shift in journalistic priorities in the deregulation era, when corporate mergers began to affect the mainstream media and turn the news into entertainment. The social commentary in Broadcast News is blunt, but helped by the insider-y take on what happens in a TV news studio as airtime approaches. The movie is also a crackling romantic comedy, starring Holly Hunter as a network news producer who’s torn between her smart, idealistic reporter pal (played by Albert Brooks) and a dim, corner-cutting hunk of an anchor (William Hurt). Outside of Albert Brooks’ own movies as a writer-director, he’s never had a movie role that’s played so well to his strengths as a comedian—with lots of quick, cutting remarks and abrasive self-righteousness—and Hunter and Hurt are just as on-point as two charismatic people with different values but an undeniable sexual attraction. James Brooks calls back to classic screwball comedies like His Girl Friday, but his version of screwball felt up-to-date in 1987, and still comes across as confident and modern. Broadcast News airs tonight on HDNet Movies at 6:30 p.m. and 11 p.m. Eastern. The Broadcast News quote-thread airs in the comment section, below. (We’ll kick it off: “A lot of alliteration from anxious anchors placed in powerful posts.”)

Or: There are a lot of films we could pick from TCM’s “Summer Under The Stars” Fred McMurray day, and we’ll eventually get to the likes of Double Indemnity and There’s Always Tomorrow, either in this column or on the site at large. But you know what’s a really fun, rarely discussed McMurray picture? Callaway Went Thataway, a 1951 comedy that pairs well with Broadcast News, in that it also considers how cynical the TV business can be. McMurray plays an ad exec who conspires with his partner (Dorothy McGuire) to find a real-life cowboy (Howard Keel) to pretend to be a long-lost western star whose old movies are unexpectedly popular with America’s youth. This being the ‘50s, the heroes eventually learn a lesson about what it means to be a role model, but not before the writer-director-producer team of Melvin Frank and Norman Panama spoof a culture in which everything’s for sale. Callaway Went Thataway will be on at 4:30 p.m. Eastern.