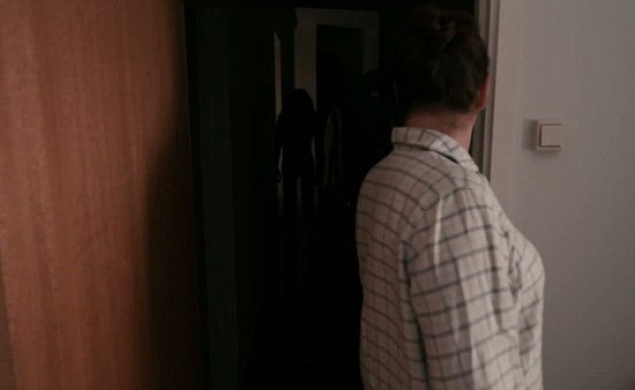 The good news about David F. Sandberg’s short “Lights Out” is that it’s just over two minutes long, which means no matter how scary it gets, viewers can be reassured that the end comes quickly. The bad news? It’s really scary. (Or maybe that’s also good news.) Playing off the common fear of weird shadows and unexplained noises in an empty house at night, “Lights Out” stars Sandberg’s wife and collaborator Lotta Losten as a women who’s heading to bed one evening when she sees what looks like an ominous figure in her darkened hallway. She decides to leave the lights on, but then they flicker inexplicably, and she begins to hear creaking floorboards, as though something’s drawing nearer.

“Lights Out” bears some similarities to the upcoming horror feature The Babadook, which also terrorizes its characters at bedtime with sound and shadow. “Lights Out” isn’t long enough to develop the layers of meaning that make The Babadook one of the most effective horror features of recent years. But in the time Sandberg has, he uses sound design and lighting to get viewers’ palms sweating and heart racing, early and often, by holding tightly on his heroine and letting a lot of the terror play out in her startled reactions and panic. It’s no surprise that Sandberg won Best Director recently when the horror shorts site Bloody Cuts held its “Who’s There” challenge, or that “Lights Out” has subsequently racked up more than a million views on Vimeo. Sandberg constructs a familiar scenario, then suggests just enough to let the audience fill in the awful details.