Arnold Schwarzenegger says robots age like people, will prove it in Terminator: Genesis 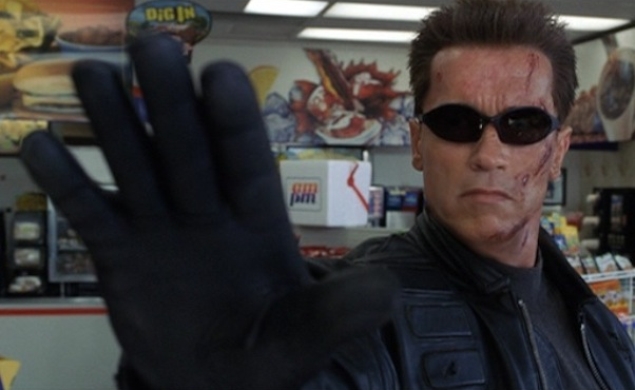 Arnold Schwarzenegger is 66 years old. When he first starred in The Terminator, he was 36. He looks a little different now. He has more wrinkles. He’s not as pumped up. But in the upcoming Terminator: Genesis, he’s playing the Terminator again, 30 years later. How is Schwarzenegger at 66 going to pull that off? Robots don’t age like people.

Or do they? While Ahnuld’s been working the press, promoting his new movie Sabotage, he’s also been talking about the new Terminator, and having to get himself back into shape to play a killer robot from the future. According to him, in the interview below from MTV, the Terminator’s human flesh “ages, just like any other human being’s flesh. Maybe not as fast, but it definitely ages.”

Who knew killer robots from the future had such sensitive skin? Remember, folks: Moisturize your cyber-assassins. It’s so, so important.

Here and in other interviews (like this one on the Nerdist podcast), Schwarzenegger also talks about his Terminator aging over the course of time, how there will be a “younger T-800” and that he will play the character at different ages using makeup and hair effects. This will mark a significant departure from the previous Terminator movies; in the past, his robots were different copies of the same model sent back in time for various purposes. None of them lasted long enough in the past to age in any significant way. While it seems kind of (or incredibly) silly for a robot to “age,” I’m grateful that Terminator: Genesis won’t simply be a rehash of one of the previous films in the series.