Harrison Ford and the desire for more Indiana Jones 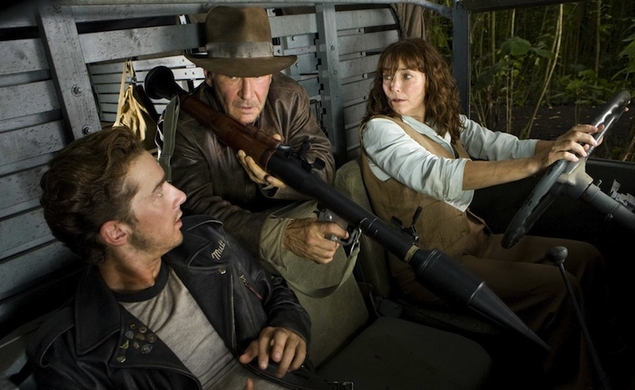 I was really excited for Indiana Jones And The Kingdom Of The Crystal Skull. I saw it twice in the theater. At the time, I would have given the film a marginally positive review, warts and all. If you looked past the bad CGI, the nonsensical plot, a wasted Karen Allen, Cate Blanchett’s Boris and Natasha accent, Harrison Ford's old-man pratfalls, the scene where Shia LaBeouf swings on vines like Tarzan, and the name “Mutt Williams,” there was a decent movie underneath. Or so I desperately told myself.

By chance, I just rewatched Crystal Skull for the first time since the summer of 2008. At long last, I have to admit the truth: This is not a very good film. Ford is certainly game (if, y’know, old) and there’s one very good setpiece (the motorcycle chase through the campus of Marshall College). Hell, I’ll even go to bat for the infamous nuke the fridge moment; it’s never struck me as any crazier than Indy surviving a fall from a plane in a raft in Temple Of Doom, and the image of Ford silhouetted against a mushroom cloud is a strikingly nightmarish one.

But that’s where my defense ends. Watching it this time, I couldn’t believe how many missteps Steven Spielberg and George Lucas made, or how many of those missteps I’d pushed out of my mind. (Remember John Hurt’s non-stop crazy babbling? I didn’t!)

The idea of Indiana Jones in a new era was kind of interesting, and shaping the film to mirror that era’s pulp fiction (trading Nazis and serials for Soviets and sci-fi) was too. But the execution was mostly a botched boondoggle.

So naturally Harrison Ford wants to make another.

Or at least he’s willing to make another. The actor told The Telegraph that he thought that the idea of a fifth Indiana Jones was “perfectly appropriate” under the right, slightly less physical circumstances:

“To me, what was interesting about the character was that he prevailed, that he had courage, that he had wit, that he had intelligence, that he was frightened and that he still managed to survive. That I can do.”

I don’t necessarily blame Ford; if someone was willing to pay me tens of millions of dollars to wear a fedora and crack a whip for six months, I’d find the concept perfectly appropriate, too. But particularly after rewatching Kingdom Of The Crystal Skull, I’m slightly mortified at the prospect of another Indiana Jones. Could it be good? Sure. But as Indy himself would probably tell you, the longer you trample through ancient ruins, the greater the risk of retribution from supernatural forces beyond human comprehension.