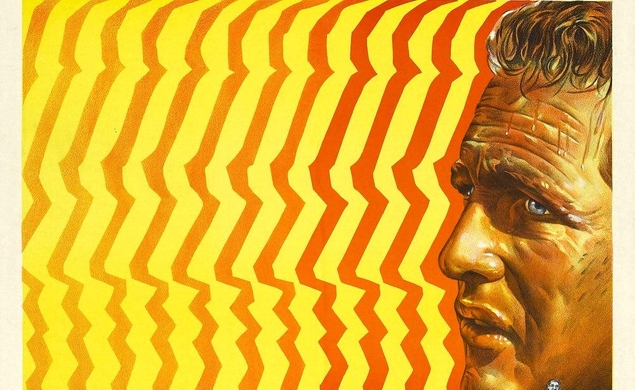 Prison movies are never really about crime and punishment; they’re more existential. Case-in-point: director Stuart Rosenberg’s 1967 adaptation of Donn Pearce’s novel Cool Hand Luke. Similar to I Am A Fugitive From A Chain Gang, Cool Hand Luke is set in a Depression-era Georgia prison camp, but the protagonist Luke Jackson (played by Paul Newman) isn’t a victim of cruel fate; he’s just some bozo, in jail for drunken vandalism. With a fine Frank Pierson script and luminous Conrad Hall cinematography, Cool Hand Luke captures the jailbirds’ aimless nights and sweltering days, broken up by a banjo interlude, an egg-eating contest, and an escape-attempt which ends in a cell-like cabin. In a narrative sense, the movie is almost pure abstraction, albeit with an entertaining mix of action, humor, and pathos (as well as an Oscar-winning performance by George Kennedy). The prison and the prisoners are symbols for the drudgery of everyday life, while Luke’s in the tradition of restless late 1960s “beautiful losers.” For these kinds of anti-heroes, the whole world is their prison. Cool Hand Luke airs on TCM tonight at 2:30 a.m. Eastern.