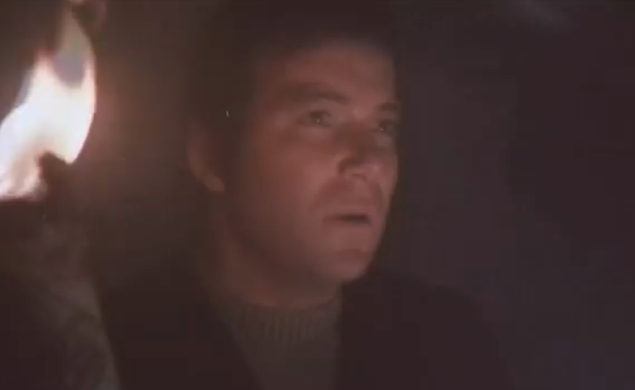 Yesterday I gave a lecture at a nearby university about horror movies, focusing on what makes a film scary in a fun way versus scary in a “sleep with the lights on” way. I tend the value the latter kinds of movies more, because they’re more challenging, but the world needs well-crafted thrill-rides too—and tasty hunks of cheese. Newly available on DVD, the TV movie The Horror At 37,000 Feet first aired on CBS in early 1973, and was, presumably, an attempt to capitalize on popular disaster films like Airport, as well as the then-a-hit-in-syndication The Twilight Zone (which once aired an episode, “The Nightmare At 20,000 Feet,” that starred William Shatner, who also appears in Horror as an ex-priest with a dark streak). The Horror At 37,000 Feet adds a supernatural element to the mix, as a jumbo jet carrying ten passengers and an pieces of ancient abbey begins to experience strange phenomena: Eerie noises, dimming lights, air-currents that force them to fly in circles, icy mists, and spontaneous possession by Latin-speaking demons.

Make no mistake, The Horror At 37,000 Feet is pretty lousy. It’s just over 70 minutes long, but has no sense of pace at all, and the TV veterans in the cast (which besides Shatner includes Chuck Connors, Buddy Ebsen, and Gilligan’s Island’s Russell “The Professor” Johnson) don’t seem to be enjoying themselves much. The viewer, on the other hand, may feel otherwise. From Shatner’s pompous speeches to the 1970s jet-set style—all shag-carpeted walls and stewardesses in mini-skirts—The Horror At 37,000 Feet lays out a smorgasbord of delightful retro-kitsch. Unlike the self-conscious “so bad it’s good” of modern SyFy Originals, The Horror At 37,000 Feet is honestly terrible. It’s an example of producers recklessly and lazily mixing formulae together; and it’s tailor-made for that subset of film-fans who bond over choice garbage.