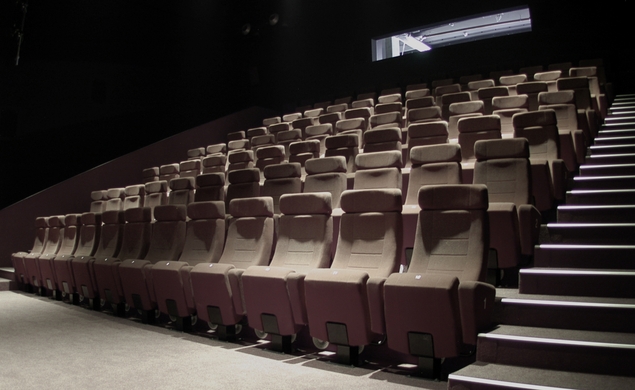 Over the weekend, numerous people in my Twitter feed shared a blog post by Hunter Walk, a former Director of Product Management at Google, titled “Reinvent The Movie Theater.” In it, Walk calls for new theaters that cater to his desire to “multitask” while he’s watching movies; to “look up the cast list online, tweet out a comment, talk to others while watching, or just work on something else while Superman played in the background.” Traditionally, movie theaters discourage all of these activities, but Walk thinks a new generation of film lovers deserves a new generation of multiplex:

“Instead of driving people like me away from the theater, why not just segregate us into environments which meet our needs. I’d love to watch Pacific Rim in a theater with a bit more light, wifi, electricity outlets and a second screen experience. Don’t tell me I’d miss major plot points while scrolling on my iPad–it’s a movie about robots vs monsters. I can follow along just fine.”

I’ve no doubt that second screen-friendly auditoriums would attract young customers. And folks like me, who’d rather eat a smartphone than sit behind someone using one during a movie, would be relieved to be rid of those patrons. But this is what I still don’t understand: why would anyone want to pay $15 to not watch a movie?

Perhaps it’s an extension of our increasingly self-obsessed popular culture. Essentially, Walk wants the experience of watching something at home—where someone can keep the lights on while updating their Twitter feed and making a sandwich—in public. It’s not enough, apparently, to tell everyone on Facebook you’re watching a movie. People have to be able to see you telling everyone on Facebook you’re watching a movie, too.

In my mind, the goal should not be reinventing the movie theater, but refining it for a new era. Instead of permitting distractions, theaters should encourage immersion. Just yesterday, I went to the brand new Yonkers outpost of the Alamo Drafthouse, which prides itself on maintaining a dark, quiet screening environment. Pre-show videos warn users not to talk, text, or tweet during the movies; patrons who repeatedly break the rules are ejected without a refund. The movie I saw wasn’t outstanding, but the experience was: the theater was dark and quiet, and the projection was bright and crisp. Not a single person checked their cell phone the entire time. It was a pleasure to give myself over to a movie without any interruptions for 90 minutes.

Have I occasionally glanced at my phone while watching a particularly uninteresting movie at home? Of course. But if I pay $15 (or more in New York City) to go see something, I do it because I actually want to see it. Maybe I’m old fashioned. Or maybe there’s another culprit here: dumb movies. Walk seems convinced he could follow Pacific Rim while playing with his iPad because it’s about robots fighting monsters. Whether he’s right or not, the perception that movies have become such vapid, empty spectacles that they can be fully appreciated with the occasional sideways glance up from email is one of the harshest indictments of mainstream moviemaking I can imagine. Blockbusters are supposed to provide viewers an escape from their humdrum lives. What does it say about how well they’re doing their job if people would rather not escape?

With bigger televisions, streaming movies, and video on demand, film lovers’ home viewing options are constantly increasing. But so are the number of devices and services competing for their attention. That’s where the theater can still fill an important niche: by providing that escape some of us still crave from the constant hustle and bustle of the real world. Here is my advice to people who want the home theater experience at the movie theater: just stay home.