Our next Movie Of The Week: Richard Linklater’s Dazed And Confused 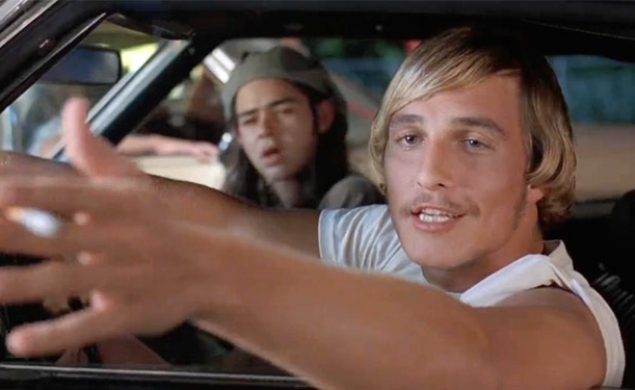 In the wake of Richard Linklater’s 1991 cult hit Slacker, Universal Pictures’ new boutique division Gramercy invited the Texas-based indie filmmaker to Los Angeles to pitch, and he won the studio over with a simple, commercial idea: a comedy set on the last day of school in 1976, following different groups of teenagers as they get high, screw around, and listen to rock ’n’ roll. Linklater would then proceed to fight fiercely with his producers over the movie he thought he was making and the movie Universal/Gramercy thought it had bought. The completed film—Dazed And Confused—barely got a theatrical release from the skeptical studio in 1993, but history proved Linklater right, as his movie went on to become a phenomenon on home video. For decades now, legions of fans have gathered in front of their VCRs, DVD players, and Blu-ray machines to watch other people hang out; and many of the young actors in Linklater’s cast of then-unknowns have gone on to greater success in movies, in the theater, and on television, including Parker Posey, Joey Lauren Adams, Adam Goldberg, Anthony Rapp, Milla Jovovich, Ben Affleck, Cole Hauser, Rory Cochrane, Nicky Katt, Renée Zelwegger (who’s in the background of a couple of scenes), and a local bartender named Matthew McConaughey.

Next week, The Dissolve will dig deeper into the history and the legacy of Dazed And Confused, a film that’s ultimately about community, nostalgia, and rites of passage. In addition to our usual Forum and Keynote (the latter of which will examine the social order of Dazed And Confused via a handful of freeze-frames), Mike D’Angelo will be contributing a secondary essay about the actors in the movie who didn’t go on to become stars. We look forward to you all joining in the conversation. In the meantime, here’s a sequence from Dazed And Confused that the producers didn’t want Linklater to shoot: a scene of little-leaguers muttering “good game,” followed by a scene of an elderly couple talking to the local high school’s star quarterback. The only plot-relevant information in this whole two minutes of film is that a group of older high school kids is waiting to whip on an incoming freshman. But to Linklater, the rituals of childhood (the “good game” line, familiar to anyone who played sports as a kid) and the sense of what football means to Texans were the real point.

Upcoming Movies Of The Week
March 18: American Graffiti
March 25: Sweet Smell Of Success
April 2: The Cabin In The Woods