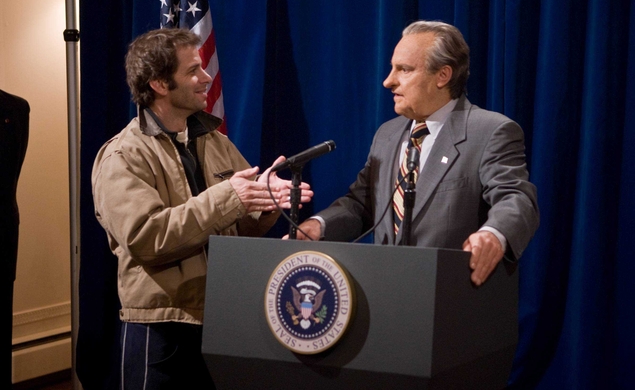 Last weekend, uber-producer Joel Silver took a shot at director Zack Snyder and his adaptation of Alan Moore’s graphic novel Watchmen. Decades earlier, Silver was going to produce a version of Watchmen that would have been directed by Terry Gilliam. The film never came to pass, and many years later, the property fell into Snyder’s hands and he made a movie which was slavishly faithful to the source material (often to a fault).

Silver told Coming Soon Gilliam would have made a “MUCH much better movie,” and discussed his take’s radically different ending, which would have seen Ozymandias convince Doctor Manhattan to go back in time and stop himself from being created, which would have created a vortex that sucked the other remaining heroes into a new timeline in which superheroes only existed as comic-book characters (you can read a screenplay draft by Batman’s Sam Hamm, here). If you thought geeks got angry when Sam Raimi’s movie gave Spider-Man organic web-shooters, just imagine the embolisms that would have popped if this thing made it to the screen.

Snyder changed the book’s ending as well, though not as radically, and much of the rest of the film was a near panel-for-panel and shot-for-shot recreation of the book by Moore and artist Dave Gibbons. And regardless of Joel Silver’s opinion, Snyder is pretty proud of what he made. Asked by The Huffington Post about Silver’s comments, Snyder called Gilliam’s ending “completely insane” and defended his Watchmen:

“So, honestly, I made Watchmen for myself. It’s probably my favorite movie that I’ve made. And I love the graphic novel and I really love everything about the movie. I love the style. I just love the movie and it was a labor of love. And I made it because I knew that the studio would have made the movie anyway and they would have made it crazy. So, finally I made it to save it from the Terry Gilliams of this world.”

Although some may construe his comments that way, I don’t think Snyder is calling Terry Gilliam a bad filmmaker. “The Terry Gilliams of this world” translates to “people who wanted to radically change Watchmen,” not “crummy directors.”

I’m of two minds about this mini-tiff. One mind says Snyder was way too faithful to Moore’s Watchmen, and that his movie could have used a little of Gilliam’s bold inventiveness. The other mind says be that as it may, the ending Gilliam wanted to make does sound legitimately terrible. I want to believe that there are no bad ideas, only bad executions, but this whole time-vortex thing really puts that notion to the test. I’d actually like to have seen another director’s take on Watchmen, but I don’t know if Gilliam’s would have made me happy either. Hurm, this is quite the conundrum.