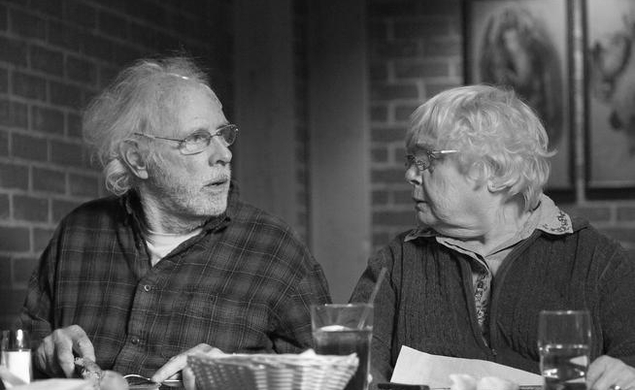 I can’t remember the last time I changed my mind about a movie so dramatically while watching it as I did with Nebraska late last year. Having been disappointed by director Alexander Payne’s The Descendants, I had an especially active bullshit detector working early in Nebraska, as Payne and screenwriter Bob Nelson set up their story about a decrepit elderly crank named Woody (played by Bruce Dern) who insists on being driven to Lincoln so that he can pick up an obviously non-existent million-dollar sweepstakes check. Take that flimsy premise, add a bone-dry comic tone—which seems initially to be treating midwesterners as slow-witted freaks—and Nebraska had me practically seething in the first half-hour. But once Woody and his son David (Will Forte) arrive at Woody’s old hometown, joined shortly thereafter by Woody’s tell-it-like-it-is wife Kate (June Squibb) and David’s more successful older brother Ross (Bob Odenkirk), the movie begins to reveal itself as something other than a typical indie quirk-com. This foursome is a curiously tight-knit group, bound together by their mutual disappointment, and by the defensive stance they’re forced to take against Woody’s old friends and relatives, who blame them for getting away from a town that was conspiring to bring them all down.

It’s entirely likely that in the hands of a lesser director, Nebraska might’ve seemed as shallow all the way through as it does at the beginning. But there’s an assuredness to Payne’s work here, evident in the film’s relaxed pace, and in the way Payne frames his characters against wide-open spaces and crumbling old farmhouses, reflecting their worries that they’re going to depart this world and leave nothing of value behind. Nebraska was nominated for six Academy Awards, but it never really caught on at the box office, and was sort of an afterthought on 2013 year-end best-of lists. This week’s DVD and Blu-ray release should finally get the movie the audience it deserves.

Elsewhere on the list this week, Milestone is finally offering the second volume of its “Films Of Lionel Rogosin” series, following up last year’s excellent On The Bowery volume with one anchored by the influential verité filmmaker’s 1960 docu/fiction hybrid Come Back Africa. The set adds other Rogosin films and interviews, and has an introduction by Martin Scorsese.