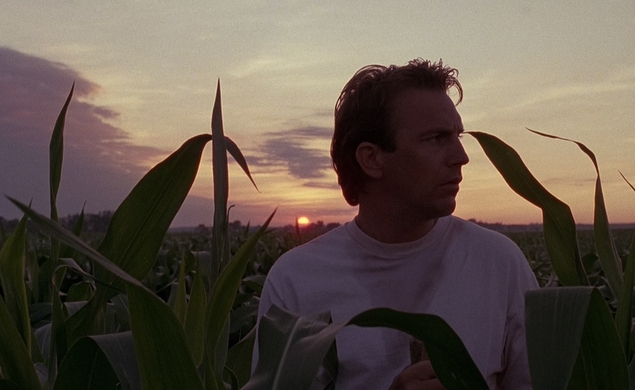 After a very quiet 2000s, Kevin Costner is mounting a major comeback. After last year’s strong supporting turn as Pa Kent in Man Of Steel, he lined up three 2014 films, including this week’s hitman thriller 3 Days To Kill and the upcoming Ivan Reitman sports drama Draft Day. In honor of this late-career resurgence, the staff of The Dissolve named a few of their favorite Costner performances. We welcome your own picks in the comments below.

The Untouchables: Early in his career, Costner established himself as an earnest, upstanding, Gary Cooper-like movie hero, which over the years has limited what directors have been able to do with him. Brian De Palma smartly exploits Costner’s Boy Scout image in The Untouchables by having him play G-man Elliot Ness as a self-righteous goody-goody who learns over the course of the film that the only way to stop crime is to play rough. Costner’s Ness remains noble throughout, but he develops more of an edge every time he allows himself to get splattered with gangster-blood. —Noel Murray

The Postman: Speaking of earnest, upstanding heroes and self-righteous goodie-goodies, I might be the only human being on record as liking The Postman, Costner’s second would-be blockbuster about a dark, dystopian world (after the infamous Waterworld). The Postman is pure corn, a schmaltzy flag-waving tribute to God’s own United States that finds something heroic, even society-saving, about something as seemingly simple as delivering mail. There aren’t many folks who could pull off a role like that, but Costner is one of them. —Nathan Rabin

Field Of Dreams: On paper, Field Of Dreams reads like the story of a man in the midst of a massive mental breakdown. He hears voices, sees visions, destroys his farm, watches baseball players appear out of thin air, and converses with men who died decades earlier. That Field Of Dreams plays as such a pure fantasy without even a hint of dread or madness is largely thanks to Kevin Costner, an actor whose sheer presence conveys innate decency and humanity. We buy into Ray Kinsella’s quest because it’s Costner on that journey, and we instinctively trust his judgement and sanity (a fact Costner himself played with to interesting effect in another film on this list). Plus, when he asks his father to play catch at the end of the film, there aren’t enough tissues in the world to soak up all the tears. —Matt Singer

Mr. Brooks: Frankly, Kevin Costner doesn’t do much for me; something about his leathery, paternal inflexibility even in his best roles has always suggested a cut-rate Clint Eastwood to me. I largely associate him with ego: with overblown, overly long spectacle movies and big vanity projects. Which is why I love him so much in Mr. Brooks, where he plays directly against his rigid-faced-hero image, and really seems to be having some fun as a deeply crazy serial killer. It’s an offbeat, weird thriller, starring Costner as a meticulous murderer trying to go straight, and William Hurt as his inner voice urging him to kill. The two men have a loose, cracked camaradarie that’s easily the most enjoyable thing about the film—and the moments where they’re verbally dueling, or in complete cackling accord, are the most enjoyable thing about Costner’s career, as far as I’m concerned. —Tasha Robinson

Tin Cup: I’m in complete disagreement with Tasha on Costner. When Costner is at his best—specifically, when he’s collaborating with Ron Shelton on Bull Durham and Tin Cup—he’s so totally relaxed and charming that it doesn’t appear as if he’s acting at all. (The fact that he’s athletic lends him extra credibility as a semi-professional baseball player and golfer, too.) It’s a coin toss for me on which of the Shelton performances I like more, but Costner’s turn as a former golf prodigy who gets another shot at glory in Tin Cup may have the edge, perhaps because he’s a little bit older and that much more comfortable on screen. While giving golf lessons to the clinical psychologist (Rene Russo) who will eventually be wooed by him against her better judgment, Costner uses the phrase “grip it and rip it” to describe a golf stroke uncomplicated by mechanics. Costner is a “grip it and rip it” actor here, too, as an irreverent and charismatic down-and-outer who has the power to make failure look like triumph. —Scott Tobias