Paul Bettany to play the Vision in Avengers: Age Of Ultron 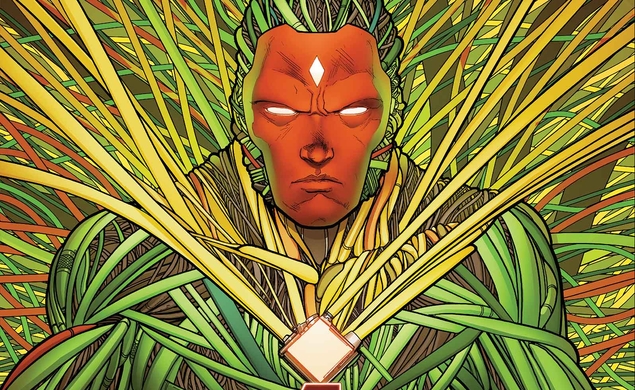 Through three Iron Mans and one Avengers movie, Paul Bettany has played J.A.R.V.I.S., Tony Stark’s droll artificial intelligence and personal computerized assistant. It’s a mostly thankless role—assuming something that’s easy and crazily lucrative can also be thankless—playing the unseen straight man to Robert Downey Jr. But now, according to The Daily Mail, Bettany will get to step out from behind his assorted computer screens and computer graphics and appear onscreen in the upcoming Avengers sequel, Age Of Ultron. He’ll play the Vision, the Avengers’ resident super-powered robot.

There’s a fairly good chance that this story will be told completely differently in the film, but in the Marvel comics the Vision (created by Roy Thomas and John Buscema) was built by Ultron as a weapon to use against his hated enemies in the Avengers. Instead, the Vision rejects his programming and helps the heroes defeat the evil robot. After his debut, the Vision joins the team, and later strikes up a robo-romance with the Scarlet Witch (who’ll be played in Age Of Ultron by Elizabeth Olsen).

In the comics, Vision doesn’t really have any connection to Iron Man or his armor (originally Jarvis was the name of the Avengers’ butler; the first Iron Man movie reimagined him as Tony Stark’s Siri). After The Avengers, there was a lot of fan speculation that perhaps Agent Coulson, who was—SPOILER ALERT FOR THE THIRD HIGHEST GROSSING MOVIE IN THE HISTORY OF CINEMA—killed by Loki, could be brought back for the sequel as the Vision, having his brainwaves dumped into a look-alike robot body or something. Instead, Coulson’s already returned as the star of the TV series Agents Of S.H.I.E.L.D.

Given Bettany’s previous role, it seems safe to guess that J.A.R.V.I.S. somehow becomes the Vision, or gets its consciousness dumped into the Vision’s body. Or maybe all robots just sound like Paul Bettany. I could see that; we like our robots polite and vaguely British. The Avengers: Age Of Ultron, written and directed by Joss Whedon, goes into production next month.