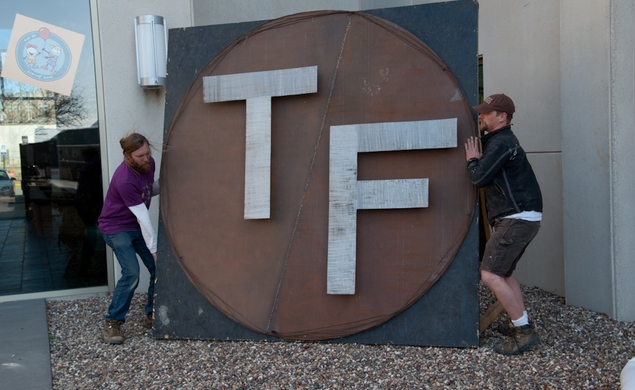 The film-festival circuit is defined by a few major outposts: primarily Sundance, Berlin, Cannes, Venice, Toronto, and New York. But in recent years, several smaller fests—some long-running, some newer—have become popular annual destinations for critics and movie-lovers, either because of when and where they fall on the calendar or because they offer something a little different. Austin, Texas has SXSW and Fantastic Fest, the former of which is far enough removed from Sundance to be its own unique indie showcase, and the latter of which serves fans of genre films. Telluride in Colorado is increasingly stealing headlines from Toronto and Venice with its small, secret lineup of major fall releases. EbertFest, TCM Classic Film Festival, London, Busan, Torino, Tribeca, Seattle, AFI, Palm Springs… each of these have their devotees.

The True/False Film Fest in Columbia, Missouri has been in existence since 2003, and has grown from around 4,000 attendees its first year to more than 40,000 in 2013. The reasons for the festival’s success are twofold. For one, the organizers have actively courted critics to come cover the event, which takes place over the course of one long weekend in a fairly contained section of downtown Columbia, making it easy to navigate. (Or so I’ve been told; I’m making my first trip up to True/False this year.) But more importantly, True/False has a unifying purpose, aiming to show both documentary films that make good use of the techniques of cinema and narrative feature films that exhibit a documentary-like quality. Because of the promise of context—along with good hospitality and significant press attendance—True/False has been able to attract heavyweights in the documentary field, such as this year’s recipient of The True Vision Award, My Kid Could Paint That/The Tillman Story director Amir Bar-Lev.

This year’s True/False runs from February 27 to March 2, and will feature Bar-Lev’s new film Happy Valley, about the Jerry Sandusky scandal at Penn State. Happy Valley made a splash at Sundance last month, as did several of the films playing at True/False: the Nick Cave quasi-documentary 20,000 Days On Earth, Concerning Violence, Captivated: The Trials Of Pamela Smart, Rich Hill, The Overnighters, The Green Prince, The Notorious Mr. Bout, Private Violence, E-Team, and Richard Linklater’s Boyhood. Those films will be joined by some faves from 2013’s Toronto International Film Festival, including The Unknown Known, Tim’s Vermeer, Manakamana, and Jodorowsky’s Dune.

The full lineup is below, with descriptions provided by the festival (including for the “secret screenings”). The Dissolve will have a full report on this year’s edition after it wraps.

20,000 Days On Earth
Singer-songwriter Nick Cave’s life is unpacked in this wildly creative re-imagining of the music doc.

Actress
An alluring, unpredictable Hudson Valley housewife decides to re-enter the acting business and deals with the consequences in this inventive chimera.

Approaching The Elephant
An enthralling, immersive look at the first year of a radical New Jersey school for young children.

Big Men
An investigation into the multi-layered world of oil exploration off the coast of Africa, from Texas board rooms to ski-masked saboteurs.

Bronx Obama
What if you woke up on election day 2008 and realized that you looked exactly like the president of the United States?

Cairo Drive
Delightfully captures the spirit of Egypt by trailing its residents as they navigate the city’s chaotic streets.

Captivated: The Trials Of Pamela Smart
A small-town murder in New Hampshire summons up a self-perpetuating media circus and now inspires this grand, enthralling work of nonfiction.

Dusty Stacks Of Mom
Jodie Mack’s mother ran a poster-and-postcard warehouse in the age of Bowie and Floyd; its demise now inspires a rock opera, which Mack will perform live.

E-Team
When crimes against humanity flare up, members of the E-Team serve as the world’s first responders.

Forest Of The Dancing Spirits
An intimate and personal account of a rainforest society perched on the precipice of modernity.

The Green Prince
The unlikely, thrilling story of the son of a Hamas leader and his tenuous partnership with an Israeli intelligence agent.

Happy Valley
In 2011, a massive scandal rocked football-crazed Penn State. Can the town recover? A morally complex and emotionally powerful film from our 2014 True Vision honoree.

Jodorowsky’s Dune
In the hippie era Alejandro Jodorowsky was a cinematic shaman on the rise, until he attempted to adapt the doomed sci-fi epic Dune.

Killing Time
Since 1982, the state of Texas has lethally injected 509 convicts on Death Row: this is the story of number 499.

Kingdom, If I Can (shorts)
Transcendence doesn’t come easy, as shown in three international shorts: The Green Serpent, Mountain in Shadow and Sirs & Misters.

Kith & Kin (shorts)
Family ties are untangled in these six shorts, climaxed by the stunning “I Think This Is The Closest To How The Footage Looked.”

Life After Death
A hilarious, sharp-eyed portrait of Kwasa, a charismatic twentysomething Rwandan native, and his “family” of American philanthropists.

Manakamana
The playfully stylized presentation of 11 different journeys to an ancient Hindu temple in Nepal.

Miraculous Tales
A tour of folk medicine, faith healing, and other comforts for the afflicted, led by the Irish farmer/raconteur Mickey McGuigan.

My Kid Could Paint That
Marla is a child artist who has sold hundreds of thousands of dollars worth of paintings. But is she the real deal?

The Notorious Mr. Bout
With his video camera ever in hand, arms dealer Viktor Bout led a wild (and well-documented) high life.

The Overnighters
Not all who flooded the North Dakota oil fields found a gusher: some of them landed in a shelter run by Pastor Jay Reinke, whose turbulent story matches theirs.

Particle Fever
The world’s most savvy scientists guide us through the largest experiment in history, the Large Hadron Collider, which seeks to unlock the secrets of life itself.

Secret Screening Burgundy
A lone man challenges an institution, fueling debate that will undoubtedly spill off of the screen.

Secret Screening Cyan
This spellbinding film draws from the mythology and history of its war-torn setting to explore the contentious relationship between man and nature.

Secret Screening Orchid
Civilization has its discontents, including this man who gave up all he knew to follow his dreams.

Stand Clear Of The Closing Doors
With Hurricane Sandy looming, an autistic teenager goes AWOL in the New York subways.

Stop Over (L’Escale)
Greece was supposed to be a getaway for a crew of undocumented Iranian men, but it ends up providing only a state of limbo.

A Thousand Suns (Mille Soleils)
Forty years after starring in one of his country’s most famous films, a Senegalese cattle herder wanders Dakar and reflects on his legacy in this dreamy chimeric work. Plays with “Vegas.”

Ukraine Is Not A Brothel
Femen, Ukraine’s topless feminist protesters create headlines wherever they go. But is there a darker truth behind the sharpie slogans?

Uncertain (work in progress)
Settle in to the sun-dappled Texas town of Uncertain where outlaws take refuge, wild boars maraud, and past lives can’t be kept quiet.

The Unknown Known
Ten rounds of sparring between Errol Morris, our greatest living interviewer, and Donald Rumsfeld, a master of political obfuscation.

Vanishing Point (shorts)
In these three mysterious shorts, including “Morning Star,” we go off like scent hounds on the trail of the disappeared.