The next thing for comic-book nerds to freak out about: a possible female Doctor Doom 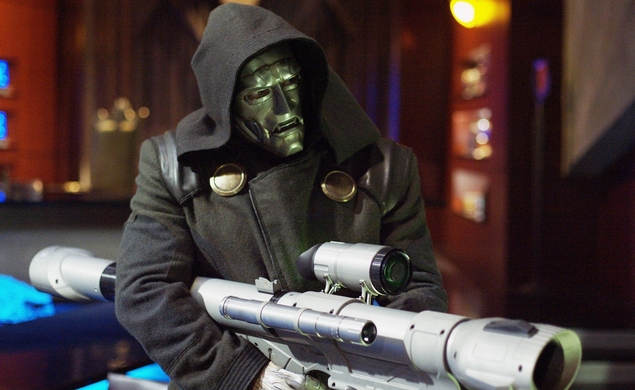 Shhhh. Listen. Do you hear that faint, plaintive whine in the distance? It’s the sound of a million comic-book nerds crying out in anguish over a rumor from The Hollywood Reporter. According to THR reporter Borys Kit, 20th Century Fox is considering casting a woman in the role of Doctor Doom in the upcoming Fantastic Four reboot.

“Dr. Doom is said to be the villain of the reboot (the character appeared in Fox’s two previous movies and was played by Julian McMahon). The Hollywood Reporter’s Heat Vision is hearing that the studio is likely to go for a big name and isn’t ruling out switching genders for the role.”

Puny mortals! Beware the wrath of Victoria Von Doom! For she now wields… the Power Cosmic!

The Doom from the previous Fantastic Four movies wasn’t particularly faithful to the source material—that’s a picture of McMahon in the role above, wearing goofy metal hands and brandishing what appears to be a Super Nintendo Super Scope—but he still bore a fundamental resemblance to the character created by Stan Lee and Jack Kirby. Flipping the character’s gender would be a much more significant break from established continuity, but doesn’t seem out of the realm of possibility for this version of FF. Director Josh Trank has already shown his willingness to think outside the box with this film, like picking Michael B. Jordan to play the traditionally Caucasian Johnny Storm. (THR says Jordan is attached to the project, while new actors like Miles Teller, Kate Mara, and Emmy Rossum are being tested for the parts of Reed Richards and Sue Storm.)

If you’d like to taste the comic geeks’ outrage firsthand, there are plenty of places to find it online. Personally, I think the idea is kind of interesting. It creates all kinds of new power dynamics between the characters. Reed and Doom used to be friends and rivals in college; now they could be bitter ex-lovers, too. There are lots of talented women who could bring something to the part; my friend Jordan Hoffman suggested Eva Green, which sounds perfect to me. Plus, let’s not forget this is a reboot. Fox made a fairly straightforward version of Fantastic Four less than 10 years ago. If the studio flacks need to remake it, they might as well do it differently. The end result might not be better than the original, but at least it would be unique.