Op-ed: Why practical effects and stunts are still the best 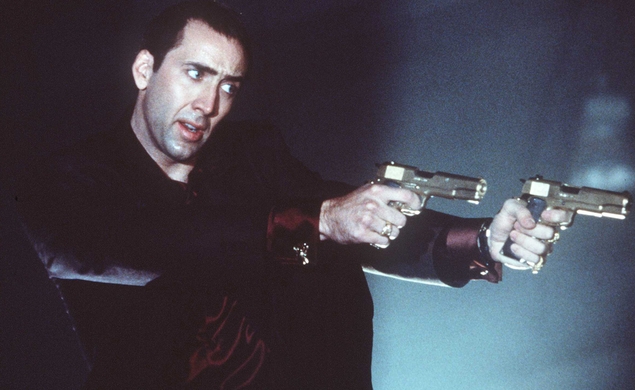 Last Saturday, the Alamo Drafthouse in Yonkers, New York held a special all-day, four-movie marathon in honor of National Treasure’s national treasure: the one, the only Nicolas Cage, who turned 50 years old earlier this month. The lineup was kept secret until the movies unspooled, but the final roster—Con Air, Red Rock West, Vampire’s Kiss, and Face/Off—ultimately offered a few takeaways. For one thing, projected 35mm film is still a fabulous way to see a movie; the archival print of Red Rock West was a particular joy to behold, sharp and rich in detail. For another, while some of Cage’s specific eccentric behaviors remain mysterious, it’s clear that he has a definitive type onscreen, what might be described as the “good-bad guy,” a hero who has fallen from grace (sometimes literally) or made a deal with the devil (sometimes literally) and must now try to redeem himself. The action quotient of the Cageathon reinforced another idea: When it comes to practical effects and stunt work, they don’t make them like they used to, and we are all poorer for it.

Take this example from 1997’s Con Air. In this scene, Cage’s Cameron Poe is fighting for his life in an aircraft boneyard. This is an action movie, so naturally everything starts exploding, and Poe has to run for his life (in very sloooooooow-motion). Desperate to stay ahead of the fireball, he leaps through the tiny window in a door, just as the entire building he’s in blows up. (Also, please ignore the Green Day music; for reasons I cannot understand, this is the only clip of this scene available on YouTube.)

This is an intensely stupid series of events. Is it really faster to dive through a window that doesn’t seem wide enough for Nic Cage’s mullet, much less his entire body, than simply opening it and running through it? Of course not. But it is way more exciting. Cage’s stunt double performs an incredible jump just seconds before an earth-shaking explosion goes off. He looks to be mere inches from the fireball and accompanying shrapnel. It’s a spectacular visual. Its awesome, death-defying beauty justifies its existence.

Here’s another cool scene, this one from 1997’s Face/Off. It’s the big final showdown between FBI agent Sean Archer and terrorist Castor Troy. (Thanks to the film’s face-switching conceit, each is disguised as the other.) After a funeral in a dove-filled church on the beach (thank you, John Woo), Troy-as-Archer escapes in a speedboat. Archer-as-Troy gives chase in a boat of his own.

Unfortunately, the clip cuts off before it happens, but in the next sequence Archer and Troy fight all over that remaining boat, and at one point Cage’s character is tossed off the thing completely. He manages to grab a dangling rope, and gets dragged through the water at an ungodly speed. After a few seconds of flopping uncontrollably like a giant fish on a line, he drags himself to his feet, and spectacularly waterskis alongside the speedboat. Then he jumps back onboard and recommences the fisticuffs with Travolta.

In 1997 (which apparently was the greatest year for action movies ever), all of this stuff was done practically. Woo and his crew jumped one boat off another boat; Con Air’s Simon West and his team built that boneyard and then blew it to hell. In 2014, most—if not all—of that would be done with computers. Given their increasing sophistication, the shots they produced might even look better than the original versions. Each image could be scrupulously designed, controlled, and executed. Mistakes could be revised in post-production; blemishes could be air-brushed out of existence. Nothing would be left to chance. Everything in the digital versions of these sequences would be perfect—and therefore inferior.

Computers can replicate almost anything, except for the one element that makes these scenes in Con Air and Face/Off special: that sense that someone is sacrificing something for their art. Last week, Vanity Fair’s Matt Patches compiled a list of five stunts that deserved Oscars in 2013. Although all of them involved a fair amount of computer enhancement, they all also involved a hefty dose of old-fashioned stuntwork. The folks in Iron Man 3 that fell out of that airplane really fell out of an airplane. (They were played by professional sky-divers.) The car that drove through the front of that plane at the end of Fast & Furious 6 was achieved with an actual rig, towed by a truck “at around 40 to 50 miles per hour” and additional cars driving at speeds “up to 70 m.p.h.”

The men who leapt from a cliff in Lone Survivor really did that, too—and without the benefit of pads, harnesses, or cable. They didn’t even land the way stuntmen normally do in these conditions to protect their bodies. “It can’t be [the traditional] ‘Land on your feet, pack your toes, go to your knees, go to your hips, go to your shoulders, and roll,’” stunt coordinator Kevin Scott told Patches. “It couldn’t be like a normal stunt.”

That, ultimately, is what a digital effect is: a normal stunt. And a normal stunt is an uninteresting one. As digital effects and big-budget spectacles become the norm in Hollywood rather than the exception, these “normal” stunts are devalued even further. We sense, if only subconsciously, that special effects are getting less and less special.

Obviously the stunt performers in charge of these sequences are professionals, and their outrageous activities are performed with the utmost care and safety. It’s not that I want someone to get hurt, or God forbid killed, to make a movie. No film is worth that sacrifice. But the fact that some people are willing to place themselves in harm’s way for our entertainment makes the images they produce that much more powerful. Watching someone actually hang from a building, or jump out of a plane, or run through a wall of fire is intrinsically different than watching someone stand in front of a green screen while that other stuff is painted in digitally. Even with all the precautions in the world, there is still an element of risk to practical effects. It may be infinitesimally small, but it’s still there. And you can’t make great art without taking some risks.