Our next Movie Of The Week: Martin Scorsese’s The King Of Comedy 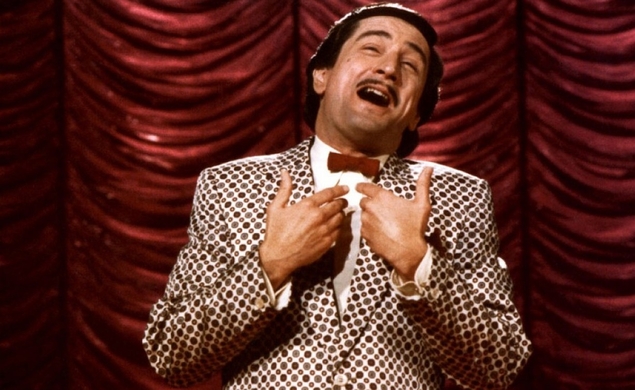 Rupert Pupkin was born too soon. The subject of Martin Scorsese’s The King Of Comedy would have loved 2014, the land of The Bachelor, 16 And Pregnant, and Real Housewives, where fame is way more important than talent, and readily available to anyone willing to debase themselves in public for it. Instead, poor Rupert is trapped in the early 1980s, when cable was in its infancy and the people on television were still required to be, y’know, funny or smart or interesting. Nowadays if he was willing to live in a house with a bunch of unstable lunatics for a month or compete in a pig testicle eating competition, he’d be on TV in a flash. Without those options, Rupert is forced to take more extreme measures for his big shot at stardom.

This prescient, disturbing, and occasionally very funny film is our next Movie Of The Week. Next Tuesday, my Keynote will focus on the movie’s surprising ending, and how it relates to the endings of other Scorsese films, including the currently controversial The Wolf Of Wall Street. Wednesday’s forum considers The King Of Comedy’s style, its depiction of fame and fandom, and its use of co-star Jerry Lewis as Pupkin’s obsession and nemesis, talk-show host Jerry Langford. It should be a great week and an interesting discussion—and since a lot of it will focus on the film’s ending, watching it in advance is strongly encouraged.

Coming up:
February 4: A Hard Day’s Night
Feburary 11: RoboCop (which we’ve subbed in due to the release of the 2014 remake)
February 18: High And Low