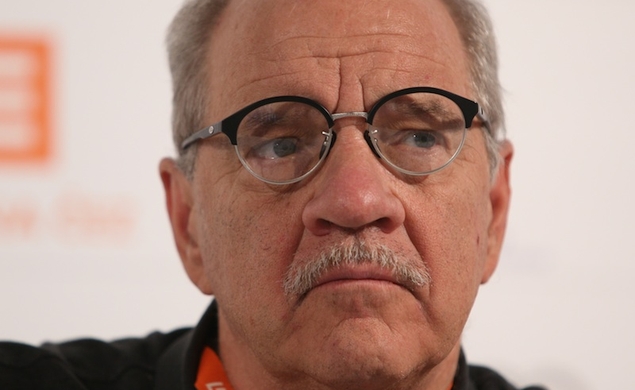 “I was exchanging emails today with Spike Lee, and we were talking about this whole concept of Kickstarter, Internet financing.”

That’s director Paul Schrader, speaking after the world première of his new film, The Canyons, at the Film Society of Lincoln Center’s Walter Reade Theater. No wonder the subject was on both filmmakers’ minds; Schrader raised over $150,000 for The Canyons on Kickstarter, and Lee is currently in the midst of his own attempt to raise $1.25 million on the crowdfunding website. As the 30-minute post-screening Q&A wound down, the moderator, the Film Society’s Kent Jones, asked Schrader whether he planned to go down the Kickstarter route again on a future project.

That’s when he revealed his recent email exchange with Lee, and a project he proposed to him: a biographical film about Supreme Court Justice Clarence Thomas. Here’s the full quote from Schrader:

“I said, ‘Spike, you and I should do a film about Clarence Thomas. I’ll write it, you direct it. Clarence Thomas is probably the most complex and interesting black power figure in America today. But if either one of us did it alone, it wouldn’t have as much strength to it. But we should do this together.’ Now when that comes up, and a project starts to have a kind of heat to it, then you say ‘Well we could crowdfinance this too.’”

Yes, they could. It sounds like the perfect idea for a collaboration, too. Can I donate to a Kickstarter on spec? I’m ready right now.

A few other choice Schrader quotes from a very interesting Canyons Q&A:

How The Canyons came about:

“There was a script called Bait, which was a kind of shark movie that Bret [Easton Ellis] had written and I was supposed to do in San Juan with Anton Yelchin and Emily Rossum. And there was Spanish money and the Euro went wacky, and the money went south. And I had to send an email to Bret explaining what had happened. In that email I said, ‘Enough of this, Bret. This is the second film in a row that’s gone bad because of the new economics. It’s now cheap enough to make a movie. Fuck it; you write it, I’ll direct it. We’ll pay for it ourselves. We won’t ask anybody’s permission and we will create cinema for the post-theatrical era.’”

On whether it was worth casting Lindsay Lohan despite her erratic behavior:

On the world of screenwriter Bret Easton Ellis:

“It’s not my world. It’s much colder than my world. As I said to him when we started the process, ‘This can’t be that expensive. What you write about is beautiful people doing bad things in nice rooms.’”

On the future of Hollywood studios:

“All these dinosaurs in the La Brea Tar Pits. I don’t know what the studio system is there for anymore. At some point, Google and Amazon are going to buy out the studios… audio/visual entertainment is migrating from public space to private space.”