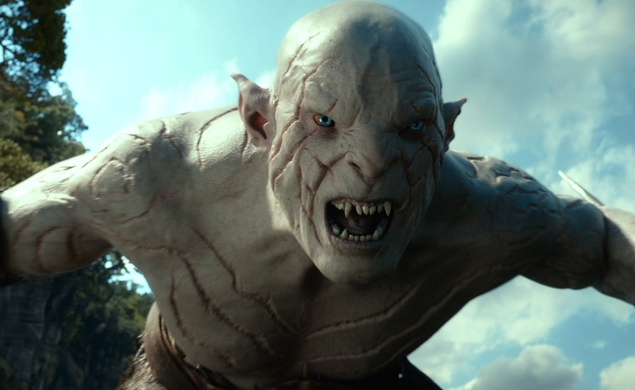 When Peter Jackson introduced the world to 48 frames-per-second (fps) photography last year with The Hobbit: An Unexpected Journey, reaction was decidedly mixed, with lots of complaints about the results looking unnervingly like HD television. For The Hobbit: The Desolation Of Smaug, Jackson’s stuck with the format and Warner Bros. is backing him up by booking the so-called “high frame rate” (HFR) version in 750 theaters, 450 more than the last time around.

HFR is supposed to make 3-D easier on the eyes by reducing the “strobing” effect that makes stereoscopic action blurry or taxing on the eyes. “When you’re shooting in 3-D, both eyes are getting hit with different degrees of these artifacts, which is what gives you eye strain,” Jackson explained in another interview. “That’s why you get headaches watching 3-D movies. 48 frames makes it much smoother.” In interviews leading up to Smaug’s release, Jackson conceded that he took some of the criticisms to heart. Although he told Variety’s David S. Cohen that many “so-called normal” people told him that An Unexpected Journey had “the best 3-D I’ve ever seen” and still believes HFR is “by far the best way to see” the new film, he’s still adjusted the look.

“I spent a lot of time in the color-grading room really putting my head into how we make the 48 not have a video feel,” he said. “Some of the criticism of the 48 frames was not actually to do with the frame rate per se, which is just making it easier on your eyes, reducing motion blur. It was to do with the fact that it felt like TV, like soap opera.” So he “spent a lot of time experimenting with ways we could soften the image and make it look a bit more filmic. Not more like 35mm film necessarily, but just to take the HD quality away from it, which I think I did reasonably successfully.”

If HFR isn’t the future, Jackson’s sure something is bound to replace the current 24 fps standard. “100 years ago it was 16 frames a second, black-and-white,” he said. “100 years from now it’s going to be different again.” This year, though, the new film was only screened for the press in 24 fps. “Last year people felt compelled, for obvious reasons, to write about the frame rate, as well as about the film itself,” he explained. “So we just said any press screenings this year, do it at 24, so at least people will just focus on the movie itself.”