From the files of Police Squad: Ed Helms to star in Naked Gun reboot 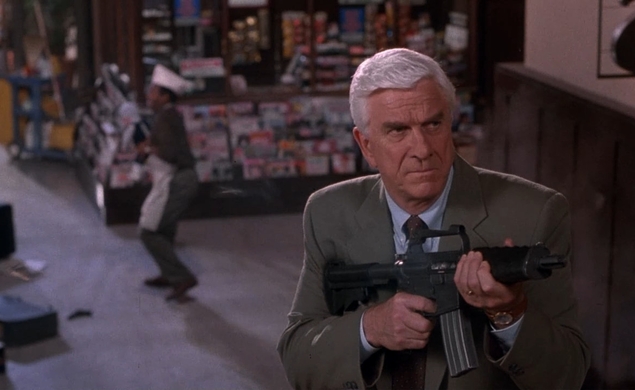 Weeks after The Naked Gun celebrated its 25th anniversary, the best comedy franchise of all time (you heard me) is now getting a reboot. Variety reports that Paramount is prepping a new version of the great cop spoof series, with Ed Helms signed on to replace Leslie Nielsen in the role of bumbling Det. Lt. Frank Drebin. They’ve also tapped Robert Ben Garant and Thomas Lennon, who spent years making fun of cops as the creators of Reno 911!, to pen the screenplay for this remake. The article on the news makes no mention of any involvement by the franchise’s creators, David and Jerry Zucker and Jim Abrahams, who introduced Drebin on TV’s short-lived Police Squad!, then resurrected him as the star of three surprisingly successful Naked Gun movies for Paramount in the late ’80s and early ’90s.

I would never remake The Naked Gun under any circumstances (all three movies, along with the six Police Squad! episodes, still hold up great), but if you held a (naked) gun to my head and forced me to, I’m not sure I would cast Helms as Drebin. Nielsen could make fun of Dragnet’s Joe Friday, but he also could have convincingly played that part straight. That hint of self-satire was part of Nielsen’s charm; he’d worked for years as a serious actor before the Zuckers and Abrahams reinvented him as a comic leading man. A choice more in the Nielsen vein would be someone like Ed O’Neill, who’s both done great comedic and dramatic work, and even played Friday on the short-lived Dragnet remake a few years ago. (At the very least, they should consider O’Neill for the role of Drebin’s boss, Ed Hocken, who was previously played by Alan North and George Kennedy.)

The Naked Gun also has the best interrogation scene ever:

And finally, here’s Leslie Nielsen’s brilliantly botched performance of “The Star-Spangled Banner.” If I’m ever invited to sing the national anthem before a baseball game, I promise to come out in a tux and do it just like this.

How in the hell do you top that? It’s not going to be easy; everywhere I look, something reminds me of the old Naked Gun.