Ben Affleck says Daredevil is the only movie he regrets 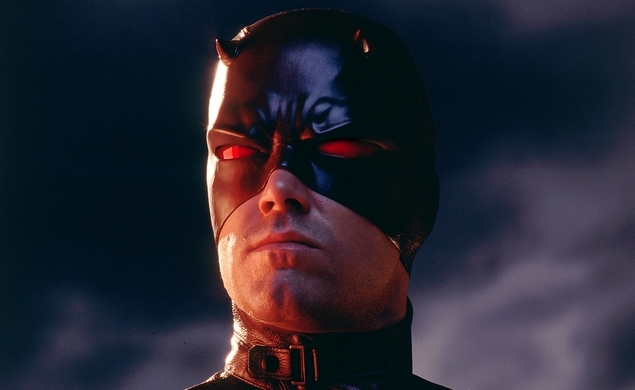 Out of all the movies Ben Affleck’s ever made, he says he only regrets one: Daredevil. This is a particularly notable fact because Ben Affleck also made Surviving Christmas. And Pearl Harbor. And Phantoms (which he was da bomb in). And Gigli. He doesn’t regret Gigli, but he regrets Daredevil? He really must not like Daredevil.

This according to an interview Affleck recently gave Playboy about his career and, of course, his upcoming role as Batman in the sequel to Man Of Steel. Asked how the fan outcry over his casting as Batman affected him, Affleck replied:

“I understand I’m at a disadvantage with the Internet. If I thought the result would be another Daredevil, I’d be out there picketing myself. [Laughs.] Why would I make the movie if I didn’t think it was going to be good and that I can be good in it?”

Noting that Affleck’s friend and frequent collaborator George Clooney kept a picture of himself as Batman on his office wall to remind him never to make the same mistake again, Playboy’s Mike Fleming asked Affleck what he’d choose for a similar decoration of warning. Once again, he mentioned The Man Without Fear:

“The only movie I actually regret is Daredevil. It just kills me. I love that story, that character, and the fact that it got fucked up the way it did stays with me. Maybe that’s part of the motivation to do Batman.”

Affleck refuses to spoil the details of Batman Vs. Superman, but admits he initially shared the audience’s ambivalence about Batfleck until he saw the full scope of Zack Snyder’s vision. “It made me excited,” he said. “All of a sudden I had a reading of the character.”