“War crimes are defined by the winners”: Watch an exclusive clip from The Act Of Killing 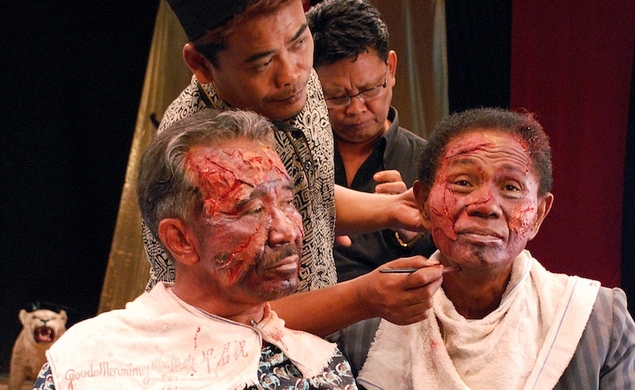 Great movies reviewed here at The Dissolve receive a special distinction: the title of Essential Viewing. So far, only three 2013 films have qualified: Berberian Sound Studio, Computer Chess, and, most recently, The Act Of Killing. The documentary from director Joshua Oppenheimer and executive producers Errol Morris and Werner Herzog is about the veterans of a brutal Indonesian coup in the 1960s. These men overthrew their government and murdered millions of communists and Chinese citizens, but they and their allies still control Indonesia, so none of them have never been prosecuted for war crimes. They were inspired, they claim, by violent American crime films. Oppenheimer offers to help them make one of their own, a detailed recreation of their own heinous acts. They leap at the chance.

“The Act Of Killing raises all kinds of provocative questions about the sins of nations in transition, and about how important it is for those in power to control the narrative. Without ever using first-person narration, Oppenheimer also ponders how a lifetime of watching consequence-free movie violence gave Congo and his ilk the confidence to behave awfully—and the irony that re-creating their crimes in a movie made them seem more real. Ultimately, The Act Of Killing acknowledges that while Oppenheimer may have subtly tortured their conscience, these thugs are paying no real price. But perhaps it’s the most apt punishment for a film buff to be convicted by cinema.”

I had a chance to watch The Act Of Killing over the weekend and agree with Noel’s review and our site’s tag: This is essential viewing. And Noel’s final sentence is right on the money; if movies inspired these actions, then it’s only fitting that movies help bring them to light as well.

The Act Of Killing premièred in New York City last weekend, but it’s expanding to Los Angeles and Washington D.C. tomorrow. To mark the occasion, the folks at Drafthouse Films sent over an exclusive clip for us to share. In this scene, the filmmakers question one of the killers about his actions and his lack of guilt, and he provides a disturbing justification:

The film opens tomorrow at L.A.’s Landmark NuArt and D.C.’s Landmark E-Street Cinema; there are filmmaker Q&As at screenings in both cities. To buy tickets for The Act Of Killing, or to find out when it’s playing near you, go to the film’s official website.