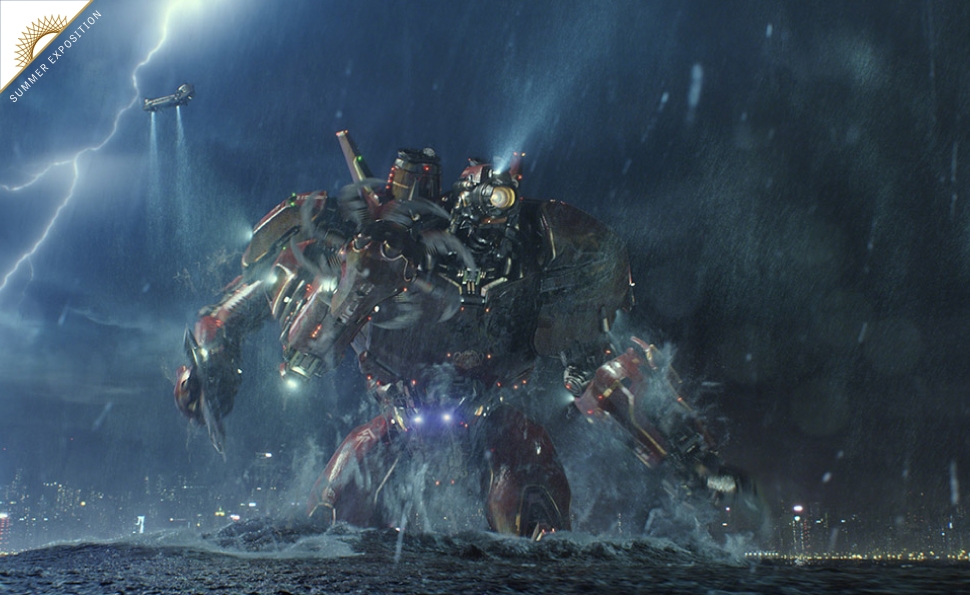 The problem with trying to build a world in two hours

One of the most frequently invoked arguments in discussions of the recent creative renaissance of television has been the idea that television has somehow replaced film. The notion that the two media are actually in some sort of zero-sum struggle doesn’t really stand up to scrutiny: The kind of storytelling that can be accomplished over a season of television and the narratives that fit well within a couple of hours are simply different. But after another crop of disappointing summer blockbusters, television does seem to be putting pressure on movies in one area: world-building.

The antihero may be the defining element of the current so-called Golden Age of Television, but equally compelling is the attention these shows pay to their detailed settings. The Sopranos’ Satriale’s and Nuovo Vesuvio, not to mention the diner where Tony and his family gathered for their final meal, offered a sense of the geographic and culinary boundaries of the characters’ lives. The Wire, which taught audiences to track an enormous cast of characters across shifting settings, paved the way for Game Of Thrones, which manages an equally huge roster, while throwing in highly developed religious concepts and millennia of history and anthropology for good measure. Even comedies like 30 Rock are granular enough to include geographical quirks like Svenborgia, a country for the ultra-rich, or Moonvest, a homeless man who’s mistaken for CBS president Les Moonves.

If shows set in something like the real world can make it this rich and strange, that ups the ante for creators who want to tell stories set in the future, or in entirely fictional environments. And two of this summer’s most initially promising blockbusters demonstrated the risks and rewards of trying to rise to the challenge and build an immersive environment in a much shorter timeframe.

Guillermo del Toro’s Pacific Rim introduced its world of destructive kaiju and the Jaeger pilots who fight them in an almost breathtakingly brisk first act crammed full of fascinating details, like the rise of pilots as celebrities and the algorithmic pace of kaiju landings. Later, it offers a glimpse of how the kaiju have affected ordinary citizens, as scientists trek into Hong Kong for a meeting with a kaiju organ dealer and end up in a public shelter during a kaiju attack. Elysium director Neill Blomkamp shows a similar flair for communicating enormous amounts of information about the partition of humanity that left the poor on Earth and sent the hyper-wealthy into space. Grubby where del Toro tends toward the grand, Elysium includes a hilariously polite robot parole officer, nuns resigned to inequality, and a hybrid Spanish-English dialect. 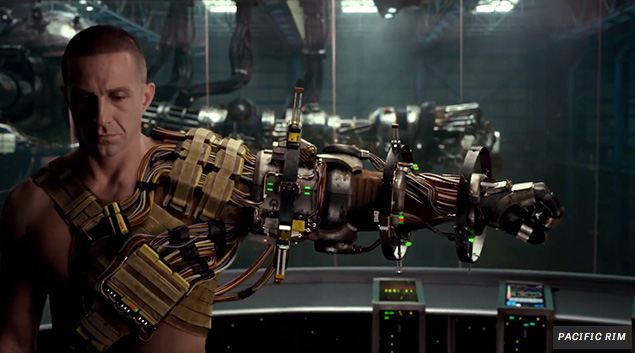 World-building is absolutely part of the appeal of both movies. The first act of Pacific Rim was so fascinating, I wished the movie was the conclusion to a trilogy, simply so del Toro would have more time to play with the rise of the Jaeger program. And like many critics, I gladly would have spent more time wandering around Elysium, finding out whether a life of extreme, labor-free luxury infects the wealthiest humans with a kind of deluxe cabin fever.

But del Toro and Blomkamp’s loving attention to detail is also the source of their films’ biggest plot holes and plausibility problems. Filmmakers can promise viewers a comprehensively realized world and give them a story rooted in the rules of that universe, but if they’ve neglected to think things through properly, those flaws become obvious fast.

In Pacific Rim, viewers are expected to believe that there’s been a complex political and cultural adjustment caused by the monsters who rampage through entire cities. But is it actually convincing that the global political community would decide a border wall would be sufficient to keep out creatures who’ve shown a clear ability to crash through such structures like tinfoil? Is it plausible that humanity would suddenly scrap a giant robot program that appears reasonably effective, and has the side effect of being awesome? Or that scientists wouldn’t bother to investigate the reason the most promising line of attack on the kaiju failed for years?

Similarly, Blomkamp’s close attention to the health-care and law-enforcement systems on Earth in Elysium invites the audience to pay attention, sometimes in ways that it seems he hasn’t. If the residents of that exalted retreat had a vast supply of medical pods sitting around, ready to be shipped off at a moment’s notice, and if access to health care is the main reason desperate people try to crash-land in Elysium, why weren’t those disparities eliminated ages ago? If robots are capable of carrying out law-enforcement operations, why is human labor still required on factory assembly lines? And why would anyone keep data of critical importance to a coup in the head of a collaborator rather than, say, in secure cloud storage? 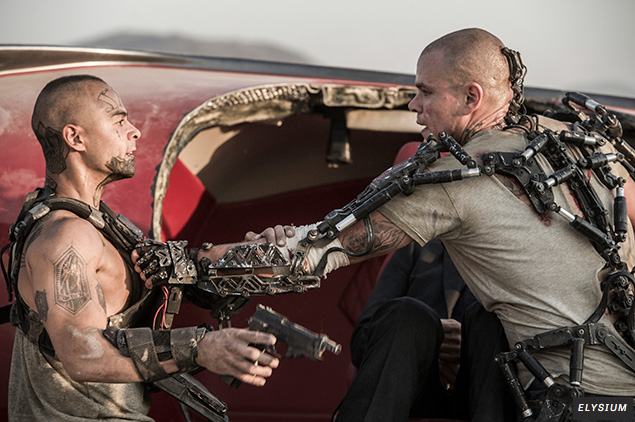 In both cases, del Toro and Blomkamp have mistaken building systems for building stories. And they’ve gotten so carried away rushing between hospitals, labs, military camps, and red-light districts that they’ve forgotten to put them all on the same rationalized maps. In trying to build overwhelmingly comprehensive worlds that will fully absorb viewers, they produced environments that reveal their own artificial nature as soon as the characters begin to act.

A cable drama might have dozens of hours to straighten out these tricky issues, or make sense of problems that became apparent after an episode initially aired. Breaking Bad took 14 episodes to resolve an issue as comparatively small as Jesse Pinkman realizing (spoiler…) that Walter White poisoned Brock Cantillo to keep Jesse in line. That show and The Wire spent years visiting and revisiting the fate of small private businesses like Los Pollos Hermanos and B&B Enterprises. But movies like Pacific Rim and Elysium only have a couple of hours to introduce enormously complex institutions, and put together plots that rely heavily on the intricate working of those institutions under extreme pressure. Is it any wonder these enormous machineries show the strain?

In the past several years, though, two independent science-fiction films have found a match between the time they have to tell a story and the extent to which they build out the worlds in which those stories are set. And they’ve done so by aiming to evoke a sense of wonder in their audiences, rather than trying to be overly comprehensive. 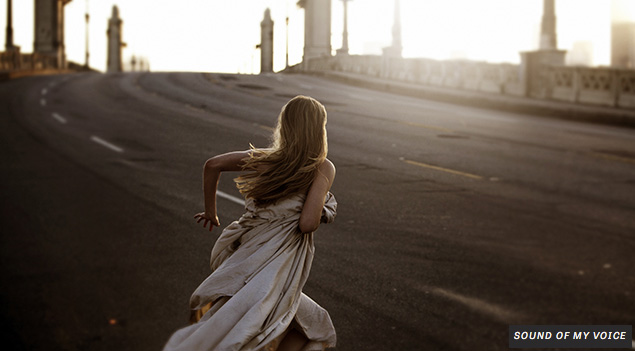 In Sound Of My Voice, the first feature collaboration between writer-director Zal Batmanglij and writer-actress Brit Marling, the tension of the movie is driven by the gap between what Maggie (Marling) says—she claims to be from the future—and what she can prove. The film begins when Peter Aitken (Christopher Denham), a substitute teacher and aspiring journalist, aims to land a scoop by exposing Maggie as a fraud, and her small cult of believers as dupes. The evidence in her favor is slim, but visually lovely and eerily compelling: a black Lego structure built by one of Peter’s students, a mark on Maggie’s body, a secret handshake of unknown origins.

But the point of Sound Of My Voice isn’t for the audience to accept that the events take place in a radically altered world. It’s to test viewers, to determine whether, like Peter, they respond to a potentially seismic change in the world by attempting to disprove it and return to a sense of normalcy, or by being willing to charge forward, into the future. The details of the world Maggie claims to have come from, and the proof that she’s correct, need to remain sketchy to serve the film’s purpose. The film’s success is due not to the fact that Batmanglij and his set designers can build a mighty creepy Lego structure—though they can—but rather that the script and the performances provide deft psychological explanations for why people might embrace or reject dramatic disruptions to what they understand to be possible.

Upstream Color, the second feature from Shane Carruth, offers up a great deal more evidence that something extremely strange is happening to Kris (Amy Seimetz), a woman who’s implanted with a parasite, divested of her home and savings, and later has an enormous worm removed from her body and implanted in a pig by a mysterious man known as The Sampler (Andrew Sensenig). In one of the movie’s final sequences, Carruth even lays out a complete ecology to illustrate what Kris has undergone, making clear that she’s part of a cycle that includes the pigs and wild orchids. But Carruth never does explain why she has been incorporated into it, or why The Sampler feels justified in disrupting her life to collect her experiences.

But once again, those aren’t the questions Upstream Color is interested in posing or answering. Instead, what’s at stake is whether Kris can recover from a shattering experience without ever fully understanding it. And in particular, the movie is interested in whether Kris can accept the love offered by a man named Jeff (Carruth himself) who turns out to have undergone a similar experience. The greatest mystery isn’t the one involving pigs and worms and orchids and the ability to invade the memories of others. For Kris and for the audience, it’s why when she tells Jeff, “Something happened to me. Something bad,” he says, “I don’t care”— that he cares for her, even though she believes she’s damaged beyond repair.

None of this is to suggest that the movies should surrender futuristic visions or galaxies far, far away to television. But filmmakers might make better science-fiction stories by remembering that humanity is small before the movie screen and the universe alike, and focusing on the sense of wonder, rather than an obsessive demand for detail.