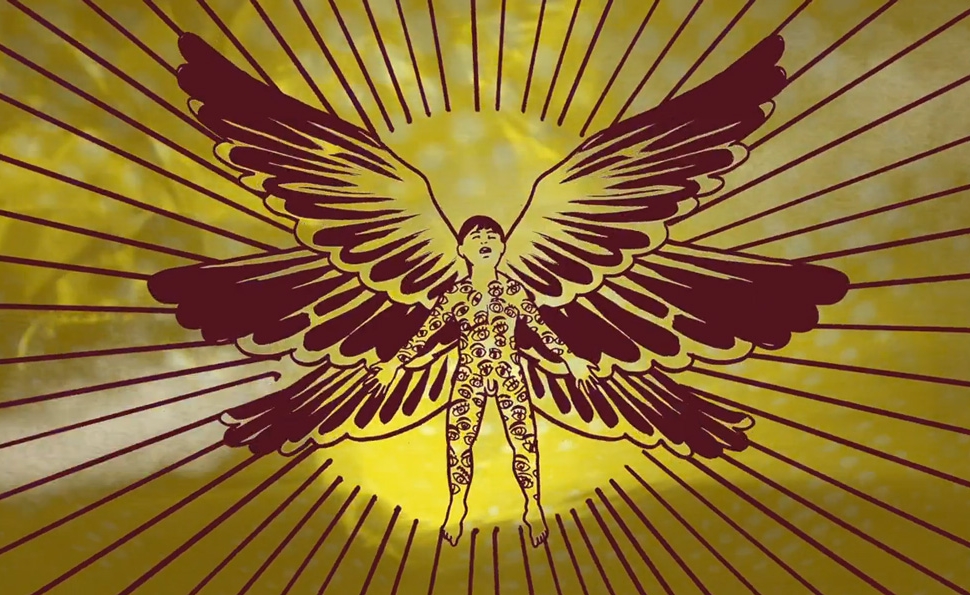 As a cartoonist, Dash Shaw takes alt-comics’ artier inclinations—the formal play, the esoteric themes, the sophisticated presentation of primitive technique—and combines them with clear narratives and simple, relatable emotions. Shaw delved into the dynamics of a dysfunctional family in his massive 2008 graphic novel Bottomless Belly Button, and in his latest book, New School, he follows a sheltered, pop-culture-addled American teen to a foreign country, where the hero is both corrupted and corrupting. As an animator, Shaw has shown the same willingness to experiment with the medium while attempting to connect forcefully with his audience. Last year, Icelandic art-rock band Sigur Rós commissioned a handful of actors, animators, and filmmakers to make music videos for the album Valtari, giving the artists freedom to let the music take them in any direction they found fruitful. Shaw and Hedwig And The Angry Inch co-creator John Cameron Mitchell turned the songs “Rembihnútur” and “Ekki Múkk” into the animated short “Seraph,” a study of sex, shame, and religion that pulls from Mitchell’s interests in the intersection between homosexuality and spirituality. The film contains only one brief moment of dialogue, when a father explains a six-winged icon to his son, saying that the creature needs two wings to fly, two to cover its naked body, and two to cover its eyes so that it won’t look at God (with “God” representing an inexplicable lust). The rest of “Seraph” follows the boy as he grows to adulthood, haunted by nudity—his own and other men’s—and compelled to carve eyes into his skin. The visual style of “Seraph” is similar to Shaw’s comics, with a thick, almost magic-marker-like line fleshed out by backgrounds that shift between textured patterns and photographs. The result doesn’t feel like a music video; it’s more like a compact version of one of Shaw’s graphic novels, turning one character’s neurosis into layered, moving art.

Ten years before Mark Osborne co-directed Kung Fu Panda, he was nominated for an Oscar for his claymation short “More,” about a factory drone who invents a device that allows people to feel the glee and optimism of childhood. Originally shot in the IMAX format, “More” has a grandeur about it, from its use of New Order’s stately, doleful instrumental “Elegia” to the scope of Osborne’s dystopian consumerist cityscape. And though the film literalizes the old saying about the entrepreneurial “fire in the belly” to a degree that verges on corniness—at several points showing the hero reaching into his gut for inspiration, and then later feeling depressed when he gains material success but loses that inner glow—Osborne keeps the narrative arc so simple and primal that “More” still resonates loudly. There isn’t much obvious connection between “More” and some of the other projects Osborne has worked on, which, in addition to Kung Fu Panda, includes SpongeBob SquarePants, Weird Al’s “Jurassic Park” video, some of the “Action League Now!” stop-motion segments of the 1990s Nickelodeon omnibus cartoon show KaBlam!, and a funky little live-action/stop-motion homage to street art called “The Exhibitionist.” Primarily, there’s a confidence to the way Osborne uses animation and cinematic language to tell stories, similar to his fellow CalArts alums Brad Bird, Tim Burton, Genndy Tartakovsky, Henry Selick, and John Lasseter. “More” has a strong flow, timed to the music, such that the editing becomes more intense as “Elegia” gets louder. When the song dwindles, so does the mood—like a kiddie-pool slowly, sadly deflating.