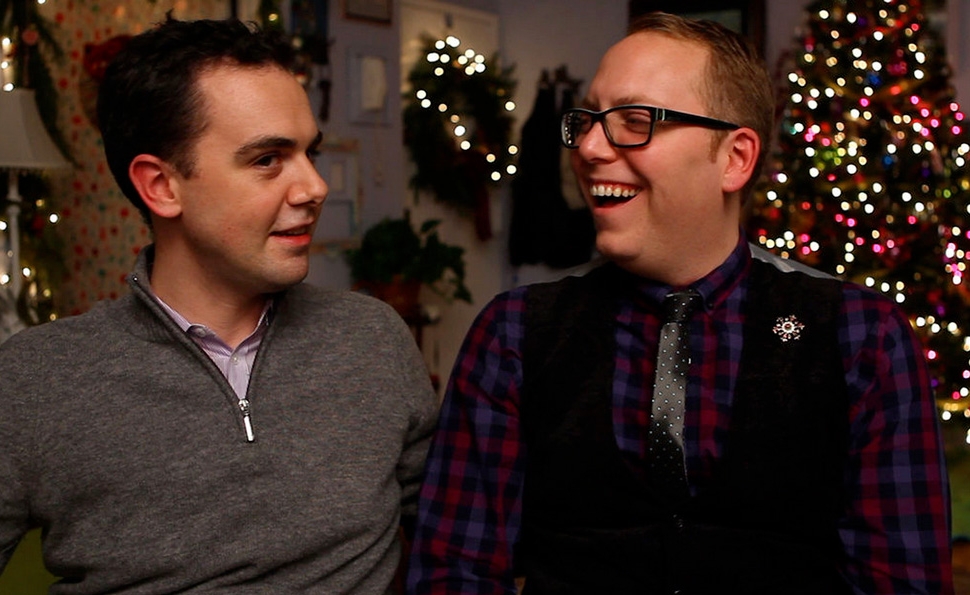 A few years back, Manhattan couple Jim Glaub and Dylan Parker inexplicably began receiving children’s letters to Santa Claus at their Chelsea apartment. In 2010, what had been a trickle turned into a tide, with Glaub and Parker receiving more than 400 letters—many from children who pleaded with Santa to give them the Christmas their parents couldn’t afford. Filmmaker Sarah Klein (co-founder of the production house Redglass Pictures with Tom Mason) found out about the letters, and followed Glaub and Parker’s efforts to turn a freak occurrence into an opportunity to spread holiday cheer. The resulting short documentary “Miracle On 22nd Street” appeared first on The New York Times’ website on Christmas Eve, 2010, and is the kind of “big city has big heart” story that newspapers have peddled since the days of “Yes Virginia, There Is A Santa Claus.”

The difference is that there’s a hard moral/spiritual dilemma at the core of “Miracle On 22nd Street” that pushes against some of the warmth. Knowing they’re in the position to help some but not all of the letter-writers, Glaub and Parker debate what they should do. Are they being cruel to the kids they don’t help? If they start buying gifts for the underprivileged, will this be a one-year event, or will they be inundated with requests as long as they live at that apartment? In the film, Glaub and Parker enlist their friends, and cling to the notion that it’s better to do something than nothing. But there’s a moment in the short when one of their helpers hesitates before picking a letter out of the box, because what if the child he draws wants something really expensive? “Miracle On 22nd Street” is a sweet, uplifting human-interest story for the most part, but only because it’s about people who move past the real fear that by opening up their hearts and wallets to people in need, they’ll end up giving more than they think they can afford.

Before “the mall” became a symbol for consumerist excess and cultural vacuity, it was for many communities a monument to progress, bringing the  city’s convenience, choice, and fiscal boon to suburbs and small towns. The promotional short “Shopping Can Be Fun” was made in 1957 to tout the success of the Hillsdale Shopping Center in San Mateo, California, which opened in December 1954. After a brief rundown of what’s available to locals via this “new concept in merchandising”—including a large Macy’s Department Store, and a farmers’ market that’s “one of the gayest attractions at Hillsdale”—the film cycles through a year’s worth of the special events held at the mall. In 1956, Hillsdale hosted fashion shows, car shows, carnivals, special appearances by TV stars, and kid-friendly activities and decorations for Easter and Christmas. The mall even invited noted San Francisco-based sculptor Beniamino Bufano to exhibit his work, some of which has remained on permanent display. What’s fascinating about “Shopping Can Be Fun” is what’s implied, but not directly spoken. Hillsdale is pitching itself as “the heart of the peninsula,” and between the Bufano exhibition, the exclusive debut of some new 1957 car models, the array of ethnic food-stands at the farmers’ market, and the narrator’s insistence that the mall’s December décor had “the feel of a real old-fashioned Christmas,” this film repositions San Mateo as a viable alternative to urban living, not as some jerkwater burg. Here, then, is an unapologetic advertisement for a carefully landscaped and stage-managed version of life, pleasantly predictable.