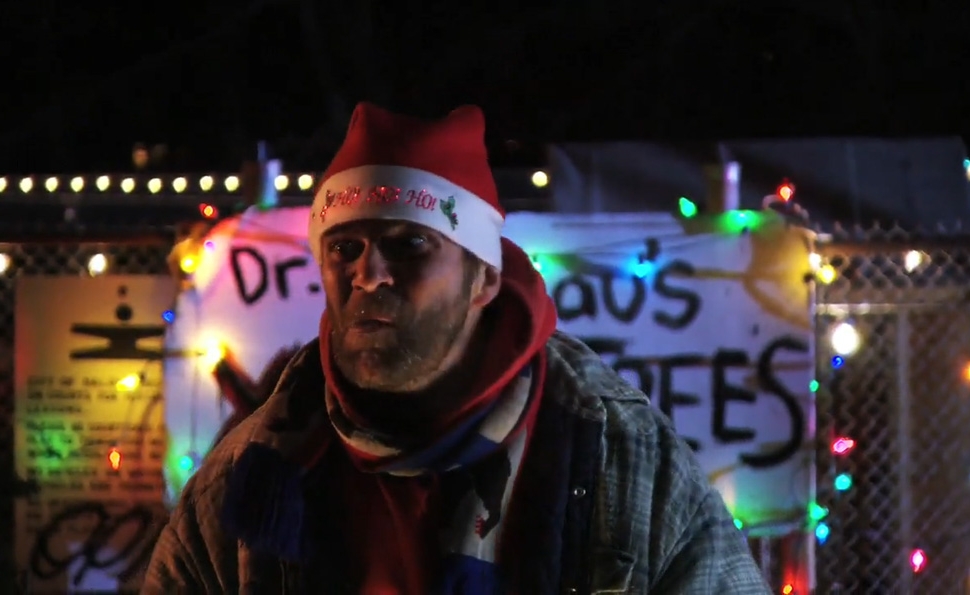 Between making the “Hobo With A Shotgun” short for Grindhouse and making the feature-length Hobo, writer-director Jason Eisener took a little Christmas break for the multi-award-winning short “Treevenge,” co-written and produced by Rob Cotterill. Imagining the holiday season from the Christmas trees’ perspective, “Treevenge” begins in a riot of man-on-wood violence and degradation, with cackling lumberjacks chopping down big trees and stomping on little ones, all so grinning families can screw the plants into shackles, adorn them with glittery plastic crap, and subject them to Christmas music. (“What is that horrible noise?” one tree shudders.) In an interview with Twitch, Eisener described the look of the film as calling back to Black Christmas, Gremlins, and the Italian mondo film Goodbye Uncle Tom, and says the film as a whole was inspired by “these Dinosaur Attack Cards trading cards that were popular when I was a kid.” It’s that last influence that gives “Treevenge” its kick. The film starts out as a cutesy retro-horror homage, with visual references to The Texas Chain Saw Massacre and a musical cue swiped from Cannibal Holocaust. And then the trees rise up, abruptly and ferociously, sparing no one from being impaled by spiky branches. And then it’s one big “Ho-ho… noooooo!”

The 1929 Laurel & Hardy two-reeler “Big Business” is credited to producer Hal Roach and director James W. Horne, but there are a couple of future auteurs hovering a little lower in the hierarchy: “supervising director” Leo McCarey, who worked closely with Stan Laurel and Oliver Hardy from the moment he first suggested they team up for Roach in 1927, and who went on to win two Best Director Oscars; and cameraman George Stevens, who won two Best Director Oscars himself before his career was done. And then there’s Laurel and Hardy, easing out of the silent era, and already—just two years into their partnership—working as a fine-tuned comic unit.

Here, they play door-to-door Christmas-tree salesman who stumble into a feud with a prospective customer (comic character actor James Finlayson) after he gets fed up with their persistence and takes a hacksaw to one of their products. “Big Business” is funny from its opening minutes, when the physically mismatched Laurel and Hardy drive their truck full of winter-ready evergreens through sunny California, and then when Laurel’s efforts to yank one of these huge trees around ends with him repeatedly smacking his partner in the face. But then the surly, stubborn customer gets destructive, and the movie’s comic pace escalates, as both the peddlers and the peddlee strike annoyed poses and proceed to rip or break things belonging to their opponent. “Big Business” was added to the National Film Registry in 1992, permanently marked as a significant piece of American popular culture that must be preserved. Not bad for a slapstick comedy as ruthlessly violent as a bargain-hunter at a Black Friday sale.