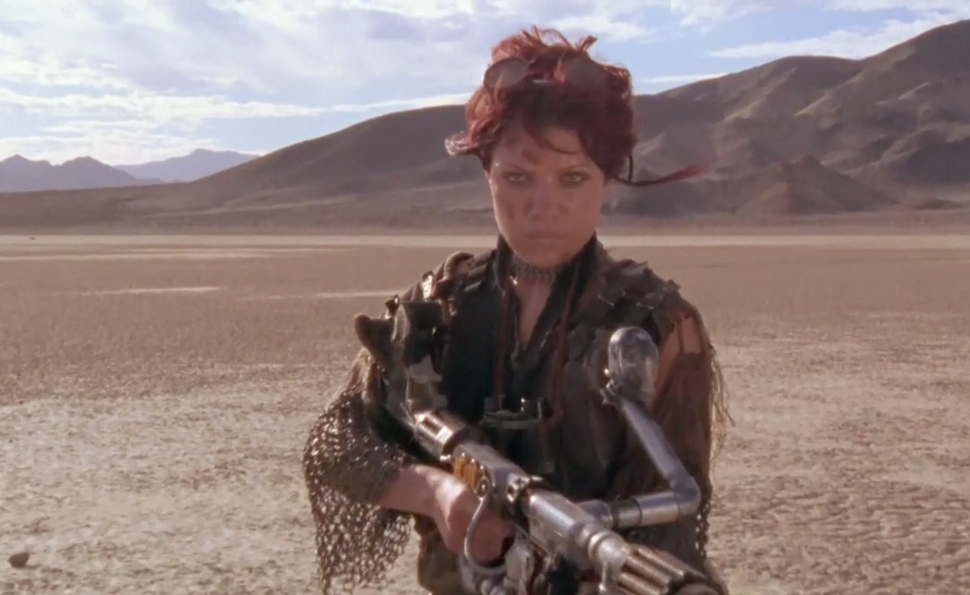 Juan Carlos Vargas’ 2006 short about a post-apocalyptic battle is titled “Man Vs. Woman,” but a more accurate title—and more awesome to boot—would be “Man Vs. Woman Vs. Robot Vs. Dinosaur.” Set on an “abandoned Earth colony” named Planet V120368, “Man Vs. Woman” stars Robert Reavis and Tiffany Shepis as scavengers who roam the parched surface of a dying world, grabbing whatever food and supplies they can. When a meteorite penetrates the ground and produces a small puddle of muddy water, The Man and The Woman converge, as do a cloned velociraptor and a cyborg. The 14 minutes of “Man Vs. Woman” is nearly all stand-off, as each of the interested parties assesses what they can take from the other: The Woman needs The Man’s boots; The Man needs the The Woman’s ammunition; the cyborg sees technology it can use; the dinosaur sees food. With no dialogue, Vargas shows what the characters are thinking by slipping into their minds, where they imagine what they’re going to do with their booty. And then the four-way fight begins.

On his website, Vargas writes that he considers this short a prologue for a feature that has yet to materialize. (Instead, Vargas’ only feature credit to date is the poorly received 2010 film Elimination. His regular gig is as a visual-effects artist for movies including 300 and I, Robot.) If he could maintain the Mad-magazine Spy Vs. Spy quality for another hour-plus, a feature-length “Man Vs. Woman” wouldn’t be the worst idea. Vargas packs plenty of action and twists into 14 minutes, as the principals keep trying to out-flank each other, never completely out of the action so long as they can adjust and adapt, using whatever they can get their hands, claws, or mechanical talons on. Meanwhile, the small amount of water everyone is fighting over keeps getting spilled, until Vargas moves the story toward a possible peaceful resolution. “Man Vs. Woman” is partly an exercise in thinking along with the characters, but mostly, it’s about the fun of watching a person catch a knife in mid-air and sever the tongue of a dinosaur that’s just escaped a robot’s clutches. It’s a contraption for delivering moment after moment of, “Wow, that’s pretty cool.”

A sort of prequel for the end-times, the bizarre 1959 educational short “Stop Driving Us Crazy” has Howard Morris (a.k.a. Ernest T. Bass from The Andy Griffith Show) voicing a four-wheeled Martian blob who flees his planet because it’s running out of oxygen, and comes to Earth as an advance scout, because he and his people have been impressed by the message they’ve heard beaming throughout the galaxy: “All men are children of God.” The Martian is shaped like an automobile, and he’s happy to see “beings who looked like me” among all the “two-legs” in the city where he lands. Once a two-legs steers him into traffic, The Martian is appalled by the drunks, speeders, aggressive drivers, and hypocrites who “say ‘the right of way’ is not as important as God’s right way,” but then behave differently. “Stop Driving Us Crazy” was directed by Mel Emde, written by kid-show veteran William Bernal, and features music by Benny Golson with Art Blakey And His Jazz Messengers. But the real creative force behind the film appears to be “The General Board Of Temperance Of The Methodist Church, in consultation with The President’s Committee For Traffic Safety.” Morris’ hep-talk and Emde’s loose, UA-like animation can’t disguise that this film has an explicit religious message, arguing that so-called Christians are hastening the apocalypse, not by breaking any of the major commandments, but by driving like dicks.