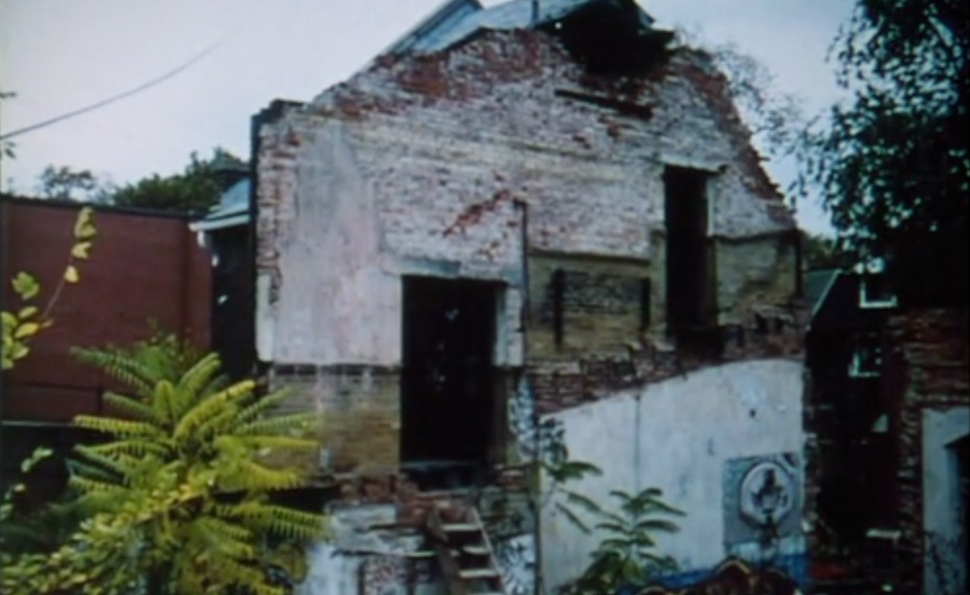 In an interview with Clint Enns, Canadian filmmaker Stephen Broomer describes how he grew up reading about underground and avant-garde films long before he actually had access to any. (“The first thing I did when I began studying at York University was watch their print of Wavelength,” he says.) Broomer’s work has the feel of someone well-versed in the traditions of experimental cinema, in that it uses the techniques of past masters in ways that let Broomer explore his own interests. The 2011 short “Christ Church - St. James” was shot in and around a Toronto-area church that was gutted by arson in 1998. It was also the site of a notorious unsolved crime. With the dissonant tooting of saxophonist John Butcher blaring on the soundtrack, Broomer layers and filters images of the church’s ruins, trying to bring to the screen the feel of the intricate graffiti that now adorns its walls and the rubble strewn about. “Christ Church - St. James” is in the mode of many avant-garde films that work as a weird kind of travelogue, conveying not just what a place looks like, but how it feels to visit. As Broomer tells Enns, “I was drawn to Christ Church by that story, not just the horror and drama of it, but the mythology of it, the hysteria surrounding it, and above all, its ambiguity… There’s memory and rebirth in that pit, a cleansing fire, but a fire that devastated a community. I was treading on a memorial, venerated by all of the graffiti tags and detritus.”

Like a lot of the early avant-garde filmmakers, Emmanuel Radnitzky—a.k.a. Man Ray—worked in multiple media before he tried film, and was already an accomplished, influential painter, sculptor, and photographer. Ray’s 1929 film “Les Mystères Du Château Du Dé” (translated as “The Mysteries Of The House Of Dice”) came toward the end of his moviemaking years, and is an example of his evolution away from pure abstraction to surrealist narrative. There isn’t a story per se in “Les Mystères Du Château Du Dé,” but there is incident, as a succession of masked travelers visit a castle on a hill, while rolling a pair of oversized dice to determine their decisions. Ray was born in Philadelphia and raised in Brooklyn, but moved to France in the 1920s. (The handful of intertitles in the embedded film are in French, with no translation.) Ray’s fascination with his new home is evident in the way the characters in “Les Mystères Du Château Du Dé” practically scramble to and through the chateau like children, basking in the décor and the view.

Ray also shows a childlike delight in what he can do with a movie camera. “Les Mystères Du Château Du Dé” isn’t a profound or masterfully controlled piece of art; it’s an exuberant, sometimes even silly home movie, capturing the excitement and wonder of an exotic place. Ray plays with dissolves—pushing slowly in to the chateau, one dreamy fade at a time—and he offers shaky first-person perspectives of visitors arriving by car, then roaming through the big house. And during an excursion into the pool, Ray runs the film backward, and pans slowly across the walls to show the beautiful reflections of ripples from the water. He combines his gifts for composition and visual texture into the very definition of an experimental film: an artist trying out new techniques with the camera, to see where he could go with it.