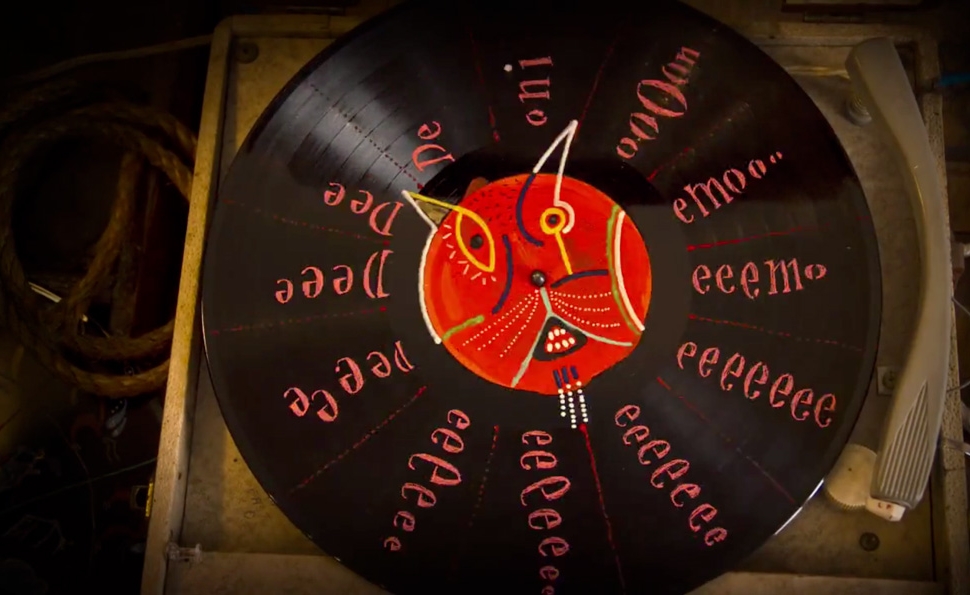 The National Film Board Of Canada has a long history of nurturing the careers of animators like Theodore Ushev, who moved from his home country of Bulgaria to Montreal in 1999, and has worked with the NFB on shorts that draw on the structuralist and abstract traditions of European animation. Ushev’s “Demoni” was made outside the NFB’s auspices—it’s a music video for the Bulgarian folk band Kottarashky & The Rain Dogs, produced by the record label Asphalt Tango—but it carries forward the spirit of experimentation and handicraft that marks all Ushev’s work. It’s a gloriously analog piece of animation, relying on a lot of the repetition and mechanical trickery that defined the art form in the early 20th century. Ushev sketched images of demonic cats and writhing snake-charmers onto vinyl records with paint and markers, then filmed the records as they spun—with some stop-motion effects worked in—to create a feeling of movement, like an old-fashioned zoetrope. “Demoni” has played at multiple festivals over the past year, and was nominated for a 2013 Canadian Screen Award (the prize that used to be known as the “Genie”), but from the music to the technique, it feels like something old and recently unearthed, not a film of now. It’s eerie in its archaicness.

Hungarian animator Ferenc Rofusz won an Academy Award in 1981 for his animated short “The Fly,” though because he was living in a Soviet Bloc country at the time, he was unable to travel to the United States to receive it. (Rofusz later emigrated to Canada, before returning to his homeland after the Iron Curtain fell.) The larger circumstances of Rofusz’s life in a communist state—albeit a relatively liberalized one—influenced “The Fly,” which originally ended with the titular insect escaping its pursuer, after seeing that it’s a person in military garb. Rofusz’s studio demanded changes, but the underlying sense of paranoia in “The Fly” remains. The rush of hand-drawn images approximate the perspective of a fly as it buzzes around the woods and then makes its way into a person’s home, where it hears the ominous footsteps of someone trying to swat it. The film starts out light and clever, then becomes suspenseful as the fly begins to land more often, risking its life every time it tries to hide or get some rest. “The Fly” isn’t strictly allegorical—the short can be enjoyed just as an extraordinarily well-realized version of a fairly whimsical idea—but it does have a clear arc, as the little bug seals its fate once it leaves the freedom of the wilderness for the confinements of human civilization.