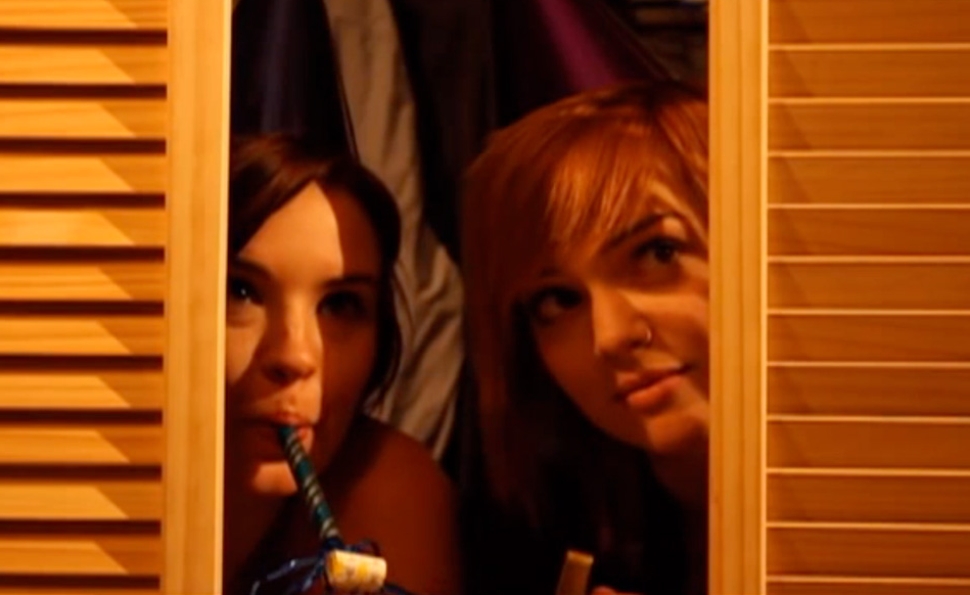 Drew Daywalt is working on a smaller scale than filmmakers like James Wan, Adam Wingard, and Ti West, but he’s become just as significant a name in contemporary horror. Working first with the collective Fewdio and then under his own imprint, Daywalt Fear Factory, the writer-director-producer has been pumping out web videos at a steady clip, coming up with clever horror-movie ideas—some funny, some twisty, some terrifying—and distilling them to just a few minutes. “The Closet” barely qualifies as a film; it’s more like a vignette, or what in a comic book would be a “one-pager.” But it’s a scary little thing, imagining what would happen if two women hid in their mother’s closet to surprise her for her birthday, and instead received a surprise of their own.

Talking to Salon in 2011, Daywalt said, “Comedians are funny because they uniquely see satire in everything they see and do. Horror writers and filmmakers tend to be worst-case-scenario types. They get into an elevator and go, ‘Wouldn’t it be awful if suddenly we were locked in here and something came through the vent? What if the cable cuts and you fall? What if the elevator doesn’t stop and you go down to hell?’ No matter where you are. You get into a door with a cabbie and the doors lock and suddenly… you know, it never stops for us. It’s a constant game of ‘What if?’” The direction “The Closet” heads is fairly predictable. (Because of the nature of the film, the daughters were bound to see a side of their mother they’d never seen before.) But the scene is well-executed, using the perspective of people in hiding to heighten the tension, all the way up to the final freaky “Happy Birthday!”

Be warned: Douglas Buck’s “Cutting Moments” isn’t some safe, cutesy Tales From The Crypt-style horror short. It’s stomach-turningly gory (thanks to special effects supervised by Tom Savini), and made all the more disturbing by the ordinariness with which it begins. Gary Betsworth and Nica Ray play Patrick and Sarah, a sullen, uncommunicative married couple with an equally moody son. Buck spends the first half of “Cutting Moments” establishing just how depressed the family is, as they murmur emotionlessly to each other while brandishing sharp tools and utensils. Then, after Sarah makes one last push at rousing Patrick from his torpor, she decides to put some of those blades lying around the house to good use. And after she starts cutting, Patrick joins in, in an orgy of self-nullification.

In a 1998 interview with Donato Totaro, Buck described the nihilistic impulse in this film as a kind of catharsis: “It’s like what Robin Wood says, that there is actually hope in apocalyptic filmmaking, in the sense that things can not get worse, but only better.” Buck carried that feeling through in his subsequent shorts “Home” and “Prologue,” which together compose the “Family Portraits” trilogy. (He also directed the not-so-good 2005 remake of Brian De Palma’s Sisters.) But the harshness of “Cutting Moments” goes beyond its climactic eruption of explicit lacerations. The film is similar to Martin Scorsese’s “The Big Shave” in the way it brings the misery of the mundane to a bloody head. Some of its most wince-inducing moments aren’t in scenes like the one where Sarah rubs her lips raw with steel wool, or the one where Patrick takes a hedge-clipper to her breast; it’s more in the still photos of the couple’s happier past, and in the way Sarah smears a smile over her face in the mirror, using her own blood.