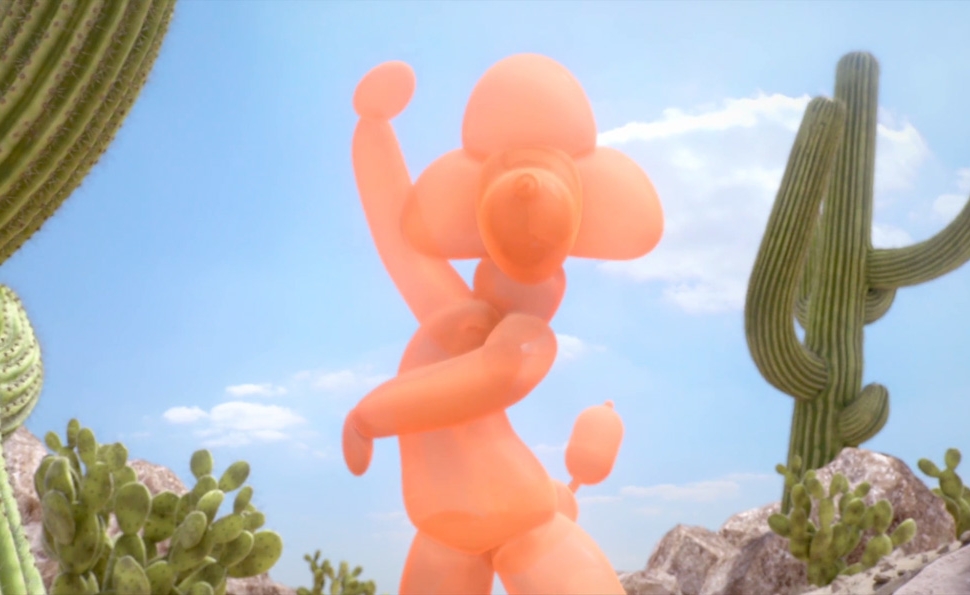 Animated experiments away from advertising

One of the great lessons of Pixar and Walt Disney has been that there’s value in letting creative people play. From the early days of Disney Animation to the present at Pixar, artists and technicians have been encouraged to make short films that try out ideas, which may later find their way into the studios’ more profitable feature films. In the process, some of those shorts have become as acclaimed and beloved as anything else the companies have produced. That same spirit of long-term investment in inspiration seems to be guiding the New York-based studio/effects house Humble, which devotes most of its resources to commissioned TV commercials and music videos, but also lets its team develop experimental projects in-house, under the collective name “Hydra.” One of the most recent of those Hydra films is “Tumbleweed Tango” (written and co-directed by Sam Stephens, with Christopher Mauch), a highly Pixar-esque vignette about two balloon animals dancing through a cactus-strewn desert. The short is partly a demonstration of how polished Humble’s work can be: The clouds of dust and transparent latex balloon-skins are impressively rendered, enhanced by a sound design that suggests without overemphasizing the rubbery squeak of two inflated dogs intertwining. But “Tumbleweed Tango” also works splendidly as a celebration of joy, showing how the dance-crazed abandon of these fragile creatures leads them to take big chances. Call it a metaphor for animators themselves, willing to risk ruin for their love of the artform.

Twin brothers Christoph and Wolfgang Lauenstein have had a long career making stop-motion animations for commercials, and owe that success largely to their main calling-card: the 1989 short film “Balance,” which won the Academy Award for Best Animated Short Film in 1990. (For historical context, consider this: The short that won the year before was Pixar’s “Tin Toy,” and the short that won the year after was Aardman’s “Creature Comforts.” The Lauensteins were flanked by the two most popular and influential animation studios of the past 30 years.) Something of a metaphor for the Cold War balance of power—and just the hunger for power in general—“Balance” follows five featureless men with numbered jackets, who stand on a precarious floating platform and keep each other in check. If one steps forward, they all step forward. If one moves too far to the edge, the others spread out to steady the platform. Then one of the men reels in a crate during their daily fishing, and soon all five of them are deliberately shifting their weight to try and take possession of the box and its contents. It’s a nifty little parable about greed and cooperation, which can be read either as a critique of the drab socialist states that were still active when the Lauensteins made “Balance,” or a critique of the capitalist impulse that ruins such states. Either way, the film presents one hell of a physics problem, taking into account all the ways these guys can outflank each other, while trying to grab what they want.